AARON RAMSEY drafted in his own medical team to ensure he can play a full part in another Wales Euro fairytale.

The Juventus midfielder arrived at the Dragons camp last month  suffering from muscle fatigue — a problem he had encountered five times in the Italian season.

Aaron Ramsey in action in a friendly versus Albania[/caption]

So during a warm weather training trip to Portugal, and in Cardiff, he brought in his trusted people to nurse him back to fitness.

Former Arsenal favourite Ramsey gave fans a scare when he sat out training yesterday  but he is confident the extra lengths he has gone to will pay off.

Wales take on Switzerland in their opening game in Baku tomorrow and he is hoping to play some part.

Ramsey said: “It has been a quite challenging time over the past couple of seasons. There have been many factors and changes that I haven’t been used to.

“In the end I have got my own team around me who are focused on just me, to get myself into the best possible shape.

“Obviously football is a team sport and a lot of the time it is about the team and everybody doing the same things, when maybe some players need a bit more attention. So I take it into my own hands really.

“I have the right people around me to try to come up with the best  possible plan  to get myself back into a place where I am feeling good and confident again.

“I had a good few weeks with them, settled in really well.

“Again the Welsh staff and medical team have been  brilliant, they have been open for discussions and it’s important to all be on the same page.

“I have known a lot of the Welsh staff for a long time, from my Arsenal days as well, there are a few of them.

“They understand me, they know my body and they know what I need.

“Hopefully we can all play a  part to try and get myself in the  best place.”

Team-mate Gareth Bale had a similar arrangement with his own people at Euro 2016 in France and it paid off.

But when Ramsey was absent from training on Thursday, just 48 hours before their opener, it set alarm bells ringing.

Aaron Ramsey has suffered injury problems at Juventus this season[/caption]

However the 30-year-old said: “It’s all good. It was a very light session for the boys on Thursday.

“It was planned that I stayed off my feet. It’s all good and I’m looking forward to Saturday.”

Caretaker boss Rob Page has opted to bring Ramsey off the bench in the two recent friendlies — and could do the same against the Swiss.

And the former Cardiff man is hoping to make a big impact — just like he did five years ago when he was named in the Euro 2016  team of the tournament.

“You have to be prepared and make the most of them. I have to perform to my best and help the team. 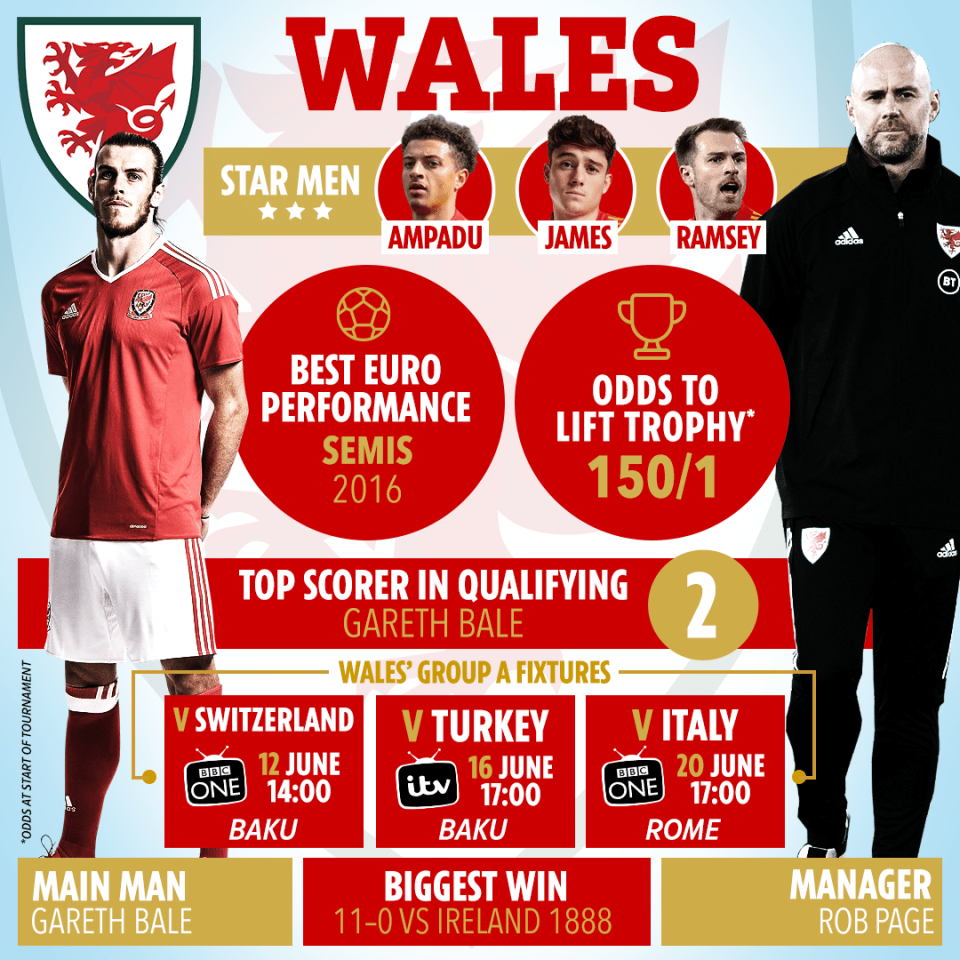 “For Wales it’s so important to get back to the Euros, we had to keep the momentum going. Doing it back- to-back is a massive achievement.

“We look forward and try to keep progressing on and off the pitch.

“To experience this will be great for youngsters — to inspire another generation of young players.”

For much of the last decade, Wales have looked to Ramsey and Bale, 31, for inspiration.

Now though, he believes there are others coming through who can be the match-winner for the Dragons.

He said: “I think we’ve got many who have different qualities who can step up. Dan James, David Brooks, Harry Wilson, Tyler Roberts, all can produce moments of magic.

“It’s an exciting time to be a Welsh fan or play for Wales.

“We’re still growing as a team and this tournament will be an experience for lot of these players.

“There’s great balance in the team. Hopefully we’ll all be  on the same page.”

Gabriel Salazar ‘accident:’ TikTok star, 19, said ‘can’t even love myself’ before reports he ‘died in a car crash’