MANCHESTER UNITED have had some of the finest players born in Britain.

So here at Sun Sport, we set United End Editor Tom McDermott the task of choosing an all-British Red Devils XI from those players he has watched during his days as a supporter (and without any Irish stars… sorry Roy and Denis). 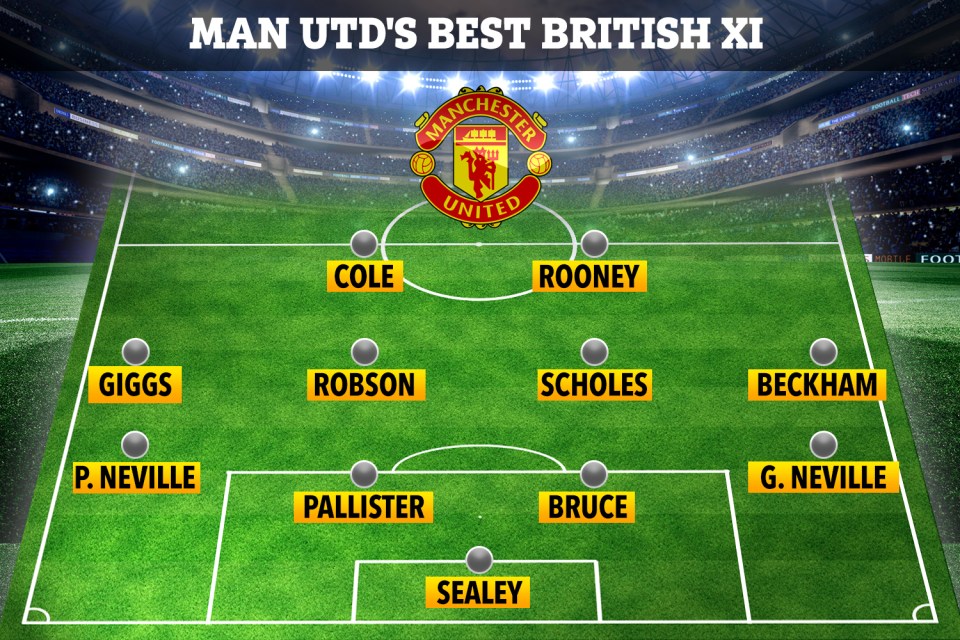 Sealey is just ahead of Roy Carroll because of his personality, and performance in the 1990 FA Cup Final replay.

He only played 31 times for United, leaving a lasting impression not just on supporters, but on the defenders in front of him.

Check out his save for United against Nottingham Forest on YouTube, if you’re still struggling with lockdown blues.

A regular for club and country for over a decade, Neville major was a leader and example to the other members of the squad, even in his early years as a senior player.

His game flourished through his twenties, and with experience, made improvements to his distribution in the final third of the pitch.

How many players over his career got the better of him?

The United captain never won an England cap but was the heart and soul of the defence during the first Premier League success and the 1994 Double-winning side.

Bruce wasn’t the quickest but was mentally superior to his opponents and could read the game as well as anyone.

We shouldn’t forget his ability to score goals at the other end as well, and not just from the penalty spot.

A club record £2.3m signing from Middlesbrough in 1989, Pallister had the poise and class required to be an outstanding defender and forged an unforgettable partnership with Bruce at the heart of the defence.

Pallister would have appeared more times for his country had it not been for injury, and a list of central defenders that included Tony Adams, Terry Butcher, Martin Keown and Mark Wright.

Perhaps his versatility cost him in the end, because he was later sold to Everton.

But, when he did play, he never let the side down, and was capable of doing more than a job in either full-back position or in midfield.

They made a film about Beckham’s right foot, that’s how good he was.

Beckham could create a goal from any position in the opposition half, even if he was given only half a yard of space.

His free-kick collection will provide younger supporters with hours of fun online and his technique is still copied to this very day on pitches up and down the country.

The first name on the team sheet and one who played in several positions.

Give him the ball in front of the back four and he’ll dictate the tempo. Play him just off the front man and he’ll score you a goal.

Scholes was an orchestrator, creator, scorer, genius. It’s as simple as that.

The crime was that his talent was wasted by several England managers.

Captain Marvel sits next to Scholes and even though his best years were behind him when the first of Ferguson’s titles arrived, the rest of the squad knew exactly how important his experience was.

At his best, Robson was the finest midfielder in Europe – all action, but with the class to match.

It’s a shame that injury robbed him of his best years for club and country.

United’s most decorated player terrorised teams for more than 20 years and his combination of skill and speed embarrassed the very best defenders across Europe.

What often fails to get a mention though, was his exceptional work-rate and desire to win.

Such attributes alongside his undoubted talent meant that he was only ever going to reach the very top.

How much would a prime Giggs cost in the current market?

United’s record goalscorer is an easy choice. A hat-trick on his debut after joining as a kid from Everton, he went from strength-to-strength.

And the interesting thing with Rooney, despite being top scorer, he has played both wide, No.10 and a midfield role.

Imagine how many he would have scored if he had played in the No.9 position all of his career?

Didn’t see eye-to-eye with strike partner Teddy Sheringham, but that didn’t stop them from performing on the pitch.

Cole’s ability to play on the shoulder of the last man meant he was a constant thorn in the side of most defences.

Far better technically than he was often given credit for, and a couple of bicycle kick goals and a lofted finish against Tottenham in 1999 stand out in my mind.