Brazil now has its own dangerous mutant coronavirus variation that vaccines may not work as well against.

It shares the mutations seen in the South African variant – but is an entirely separate form, as far as scientists can tell – that may disguise it from the antibodies the immune system develops after being infected or getting a vaccine.

Scientists say it’s unlikely that these mutations will render natural immunity or immunity offered by a vaccine completely useless.

But these mutations affect the piece of the virus that antibodies recognize, so it might take longer for the immune system the threat and to kick into gear to fight the virus, even after vaccination or a prior infection, experts told Stat News.

It comes as the variant that emerged in the UK, known as B117, is spreading around the globe. The more infectious variant is in at least 33 countries, including the US, where 64 cases have been confirmed in a little over a week since it was first detected. 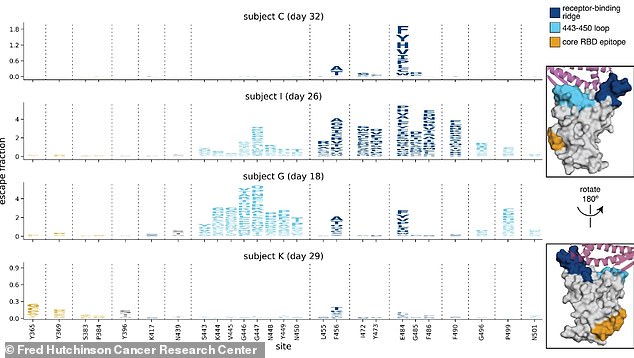 A mutation (dark blue) seen in the coronavirus variants found in Brazil and South Africa may help them ‘escape’ antibodies triggered by vaccines or prior infection more often (shown in dark blue, rising with how frequently the mutation ‘escapes) 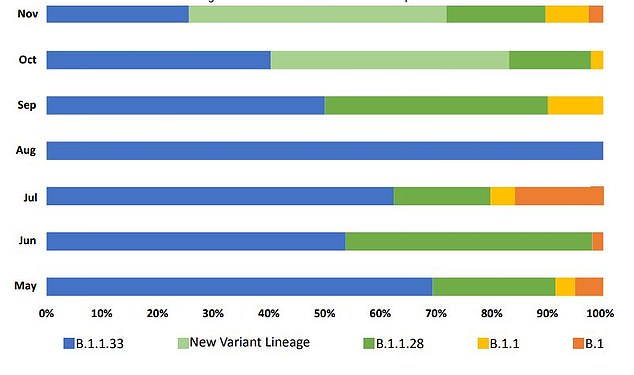 The new variants from South Africa and Brazil have the world on edge because they may not respond as well to vaccines, but they are still relatively rare.

A new variant in Brazil was first identified in Rio de Janeiro, the sprawling but densely populated city on the country’s seaside in October.

At first, it was mostly isolated to the city, but already driving cases and infections  back again in the hard-hit city, which has seen 470,138 cases to-date.

But, by December 23, the Federal University of Rio de Janeiro researchers who discovered it were becoming concerned.

‘The significant increase in the frequency of this lineage raises concerns about public health management and the need for genomic surveillance during the second wave of infections,’ they wrote.

At the time, it was clear that the variant was becoming more common, but how exactly it differed an might be more dangerous wasn’t clear.

But by December 26, the potential risks of its mutations were becoming clearer.

Viruses mutate constantly. A few changes won’t alter how one affects humans at all.

A few more might make it a little more infectious, but still responsive to the same antibodies and other immune defenses that worked against its other forms. 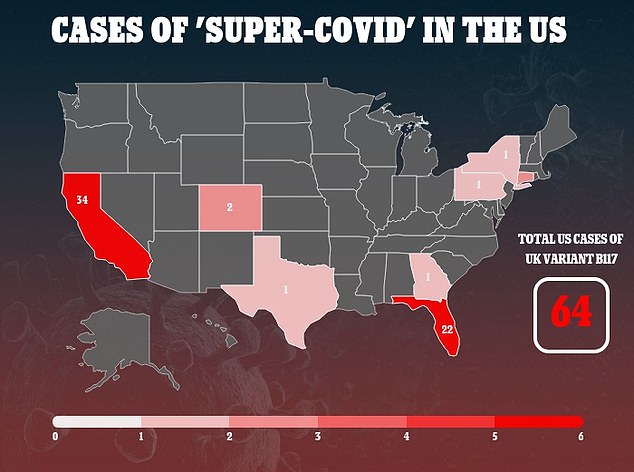 Neither the variant from South Africa nor the one from Brazil have been detected in the US – but in a little over a week, the more infectious UK variant has been found in eight states

But enough mutations, and a virus may become unrecognizable to our immune systems.

The variant now spreading in Brazil, the one coming out of South Africa and the one devastating the UK (and now in at least eight US states) all share a mutation that makes them better at latching onto receptors on the surfaces of human cells.

For the time being, B117 is a more pressing threat because it is already becoming dominant in some places, and has quickly spread to dozens of countries.

Experts warn that the more infectious variant will mean more people get ill and hospitalized, raising the risks that hospitals will become overwhelmed, which, in turn, can lead to more fatalities.

The world is in a dangerous but narrow period of time for a variant like B117. Once countries reach herd immunity

B117’s mutations make it better at infecting human cells. The better it is at grabbing on to receptors, the more effectively it can take over our cell machinery and churn out more copies of itself. 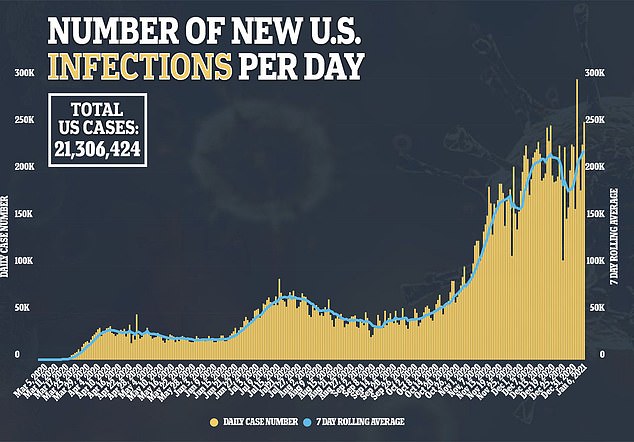 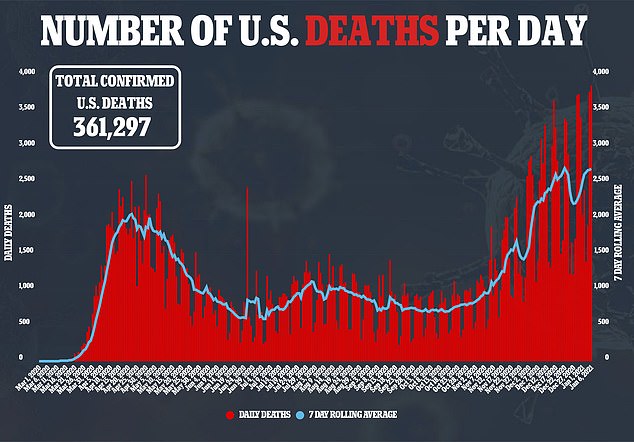 The more copies it can fill a host’s body with, the more likely the host is to ‘shed’ those viral particles – meaning an infected person’s sneeze, cough or even breath is much more loaded with virus, increasing the odds it will be passed on to someone else.

But that doesn’t make it any less recognizable to antibodies that sound the alarm for the immune system to mount a defense.

B117 is unlikely to pull one over on the immune system.

The variants identified in Brazil and South Africa – though not identical – share a further mutation to a location on the viral genome known as E484K.

This is ‘the site of most concern for viral mutations,’ wrote Fred Hutchinson Cancer Center researchers, because it could make the new virus harder for the immune system to recognize and keep antibodies from neutralizing it by blocking the receptors that would otherwise latch onto other human cells.

A vaccine that is pretty good at teaching the body to identify this variant – but not perfect – will still be worthwhile, likely still preventing most people from becoming seriously ill with the virus. 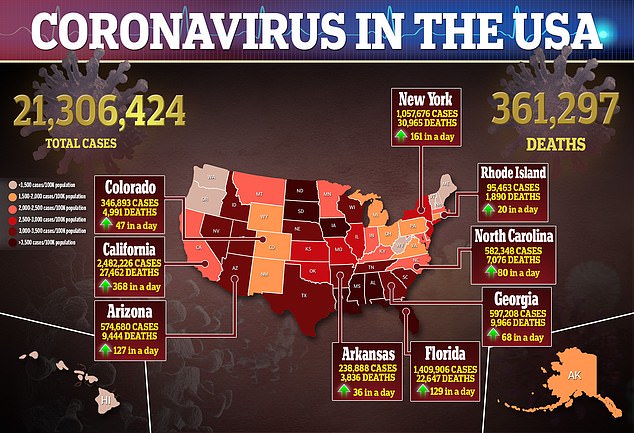 But it’s the type of change that scientists keep a close eye on. Most assume that vaccines will eventually have to be updated to account for such mutations.

Neither the variant from Brazil, nor the one from South Africa have been identified in the US.

The South African variant is, however, already in the UK. US scientists broadly assume once something is in the UK, it’s in the US, because of the countries’ close economic ties.

The US Centers for Disease Control and Prevention (CDC) is stepping up the number of samples of coronavirus it does a full genome sequence on in order to find out if they are a new variant.

But it’s slow going, and the US has lagged sorely behind other countries for sequencing, raising fears that by the time Americans know a new variant is here, it will be everywhere.