DOG the Bounty Hunter says other prisoners will make Brian Laundrie’s life “hell in jail” when he’s arrested by police, adding that he believes the fugitive fiancé of Gabby Petito is still alive.

Laundrie has been on the run for more than four weeks, having vanished sometime around September 13 amid an investigation into Gabby’s disappearance – six days before she was found murdered at a Wyoming campsite.

The 23-year-old is not currently considered a suspect in Gabby’s death but he is considered a person of interest.

He is, however, wanted on fraud charges after he allegedly used a bank card belonging to Gabby, racking up charges of over $1,000 between August 30 and September 1.

Law enforcement have been focusing their search on the 24,000-acre Carlton Reserve in Sarasota County where Brian allegedly told his parents he was going hiking before he disappeared.

Dog, meanwhile, has been conducting his own search of Fort De Soto Park, somewhere where Brian and his family were known to regularly visit including as recently as September 6.

‘DOESN’T HAVE THE GUTS’

Despite a month-long search so far unearthing no concrete traces of the wanted van-lifer, Dog exclusively told The Sun that he’s certain Brian is still alive.

“Is he alive? Oh yeah, he’s still alive,” the TV star said. “Do they wish that we thought he was dead? Oh yeah.

“I don’t think he’s that personality,” he continued. “I guess it takes a lot of guts to kill yourself.

“I like to think that I have a lot of guts but I don’t have [enough] guts to kill myself – and I don’t think he does either.”

Dog also said that he believes it’s just a matter of time before Brian is captured by investigators.

He also alleged that Brian killed Gabby, despite the fact he’s not currently considered a suspect, and will soon be charged for her death.

“You’ve committed a terrible crime,” he alleged of Laundrie. “You’ve gotta pay for this, so you might get 20 years [in jail] and do 11.

“But for the next 11 years you’re inside a Wyoming penitentiary and them cowboys up there, they don’t like it if you kill a girl or a child.

“Almost every penitentiary in America don’t like if you kill a girl or child so he was going to have – as they would say in Wyoming – hell to pay.”


Jac Jossa shows off £1m home and Queen Vic bar – but can you spot the error?

Dog, 68, joined the search for Laundrie last month at the behest of his fans.

He was on honeymoon with his wife Francie when he learned of Brian’s disappearance but felt compelled to interrupt his romantic trip to aid in the hunt for him.

He told The Sun through tears that Gabby’s father lost his daughter and that “she was the same age as Barbara Katy” who Dog lost in a tragic car accident at 23-years-old.

He said the pull to jump into the search was just too much.

“Then we came down here and I said to Francie ‘Honey, it’s eight hours away. Honey, I need it so bad. My skin is crawling, I’m getting goose bumps. I’m having those dreams FREEZE I GOT YOU BOY! I’m having those kinds of dreams Francie.”

On Tuesday Dog urged Brian to “turn yourself in” after it was revealed the Gabby Petito was strangled to death and her body left out in the Wyoming wilderness for three to four weeks.

“The corner’s report is not good for the entire Laundrie family. Brian’s only chance is to turn himself in – he cannot run forever,” Dog said.

“The Laundrie’s have stonewalled Gabby’s family because they knew what Brian had done. And it looks like they helped him run.

“And now it seems like, based on the [autopsy] report and coupled with their behavior, that they have most likely aided and abetted a murderer.

“Strangulation is not an accident,” he continued. “Right now it looks very bad for the Laundrie family.”

Brian and Gabby, who met in New York before moving to Florida two years ago, were around two months into their planned four-month cross-country road trip touring the US’ national parks before Gabby vanished sometime around August 27.

Brian quietly returned home to Florida alone on September 1, failing to alert police or Gabby’s family that she was missing.

He reportedly acted “without a care in the world” upon his return, neighbors said, mowing the front yard and enjoying idyllic bike rides with his mom.

Gabby was eventually reported missing by her mother in New York on September 11. That came after 10 days of allegedly being stonewalled by Brian and his parents about where her daughter was, she said.

Then, on September 13, Brian allegedly vanished after telling his parents he was going hiking at Carlton Reserve.

But they didn’t report Brian missing until four days later.

A four-week search for Laundrie has so far yielded no leads beyond speculation and a handful of potential sightings.

Neither Brian nor his parents have been charged with any crime relating to Gabby’s death at this time.

An investigation into Gabby’s murder continues.

Dog ended his honeymoon early to join the search[/caption]

Gabby’s body was found at a campsite in Wyoming[/caption] 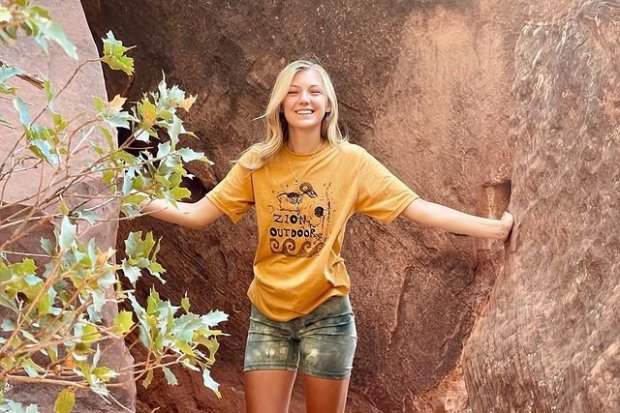 Tragic Brittany Murphy ‘could have been SAVED’ if husband Simon Monjack took her to the hospital sooner, doctor claims