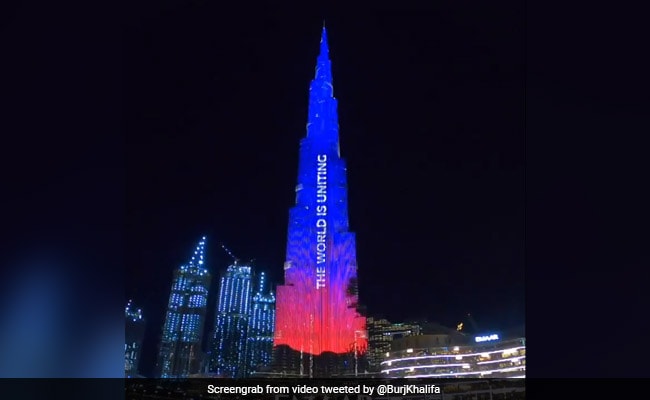 The Burj Khalifa in Dubai, lit up in solidarity with Australia where devastating fires are still burning

The world’s tallest tower, Burj Khalifa in Dubai, lit up Wednesday night in solidarity with Australia where devastating fires are still burning.

The bushfires have consumed about 10 million hectares (100,000 square kilometres), leaving at least 28 people dead and destroying more than 2,000 homes since September.

The skyscraper, which is 828 metres (2,717 feet) high, lit up with the statement “We can all help” and the hashtag MatesHelpMates to show support for Australia.

In collaboration with @expo2020dubai#BurjKhalifa lights up for Australia to spread hope, strength and support to its people during these trying times to get back stronger. #MatesHelpMatespic.twitter.com/Lo1JxaNXD3

The fires have dominated headlines globally, prompting an outpouring of aid for victims.

Up to a billion animals may have died in the fires, which may drive some species closer to extinction, environmental groups say.

Australia experienced its driest and hottest year on record in 2019, with its highest average maximum temperature of 41.9 degrees Celsius (107.4 degrees Fahrenheit) recorded in mid-December.

(Except for the headline, this story has not been edited by NDTV staff and is published from a syndicated feed.)

Rare Edward VIII one pound coin has sold for eye-watering £1million – is it...

Rare coins are often put on sale but this does not necessarily mean they are worth a lot of money. The Edward VIII...

THE days of rushing to the corner shop after school to buy a packet of Love Hearts may (sadly) be long gone –...

Cruises in freezing weather & 'mini cruise' breaks – the trends shaking up your...

In a bid to remain up to speed on what cruise goers want, Virtuoso, a global network of agencies specialising in luxury and...

Beijing, China: China's birth rate dropped last year to its lowest level since the country was founded in 1949, adding to concerns that...

Vitamin B12 deficiency symptoms: Pain here could be sign of even...

US Professor Apologises For Mentioning Trump's Son At Impeachment Hearing

Rare Edward VIII one pound coin has sold for eye-watering £1million – is it...