The French icon was named in awesome XI by the Chelsea boss after several tough decisions across the pitch. 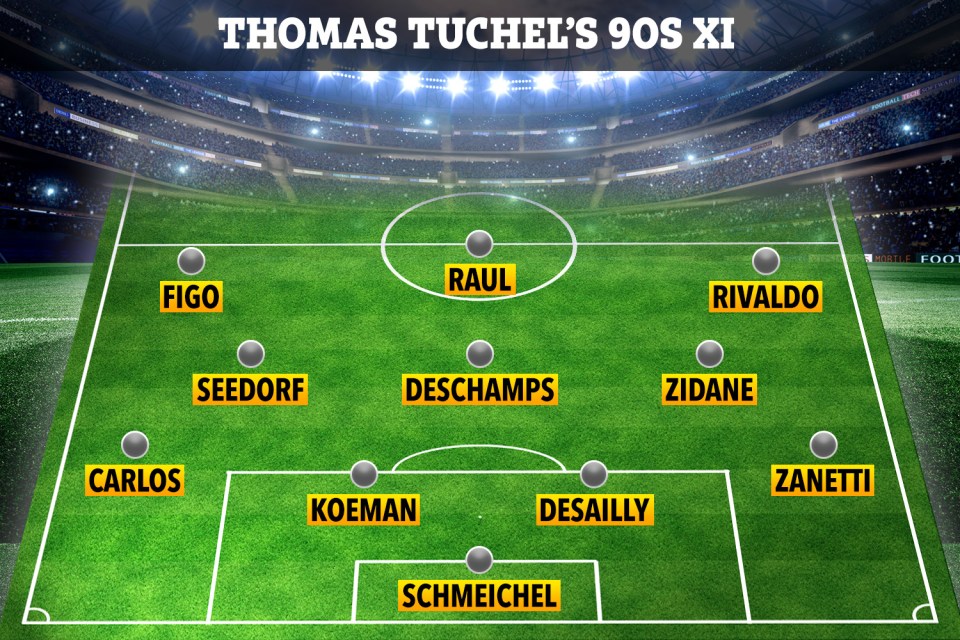 Tuchel, a defender himself during a short playing career in Germany, selected Stamford Bridge hero Marcel Desailly alongside Roberto Carlos, Javier Zanetti and Ronald Koeman in his backline.

Speaking of the Dutch great, he recalled: “Ronald Koeman was my hero when I was watching international football and Barcelona.”

In goal, the 47-year-old made what he called a ‘bold move’ to go ‘against Germany’ and pick Peter Schmeichel over Oliver Khan.

None of Tuchel‘s countrymen made it in with English players also snubbed from the line-up.

Paul Scholes lost out to Clarence Seedorf in the battle to line up alongside Zidane and the ‘totally underrated’ Didier Deschamps in midfield.

And, despite being a ‘huge fan’ of David Beckham’s, the Manchester United legend missed out to Luis Figo.

Thomas Tuchel has named his ultimate XI of 1990s footballers[/caption]


Kane can leave Spurs for £150m CASH ONLY, Chelsea 'to make Haaland bid'

Former Barcelona and Brazil star Rivaldo took up position on the opposite flank before Tuchel made a surprise pick up front.

Faced with having Ronaldo Nazario or Raul as his striker, the coach backed the Spanish forward.

Tuchel’s reason was simple: “I met him!”

Both Raul and Roberto Carlos made it in after he spoke highly of meeting the Real Madrid icons, leaving Ronaldo and Paolo Maldini on the bench.

Vitamin B12 deficiency: The signs in your hands and feet you could be lacking B12