A HERO dad has revealed the horrific moment he tried to save a man from a fireball car crash before the scorching heat forced him to give up.

The vehicle burst into flames after ploughing into a block of flats in west London yesterday, killing three people.

The remains of the car following the ‘fireball’ explosion[/caption]

Brave Danny Rigby, 36, tried to save the driver[/caption]

The driver could be heard screaming moments before his car exploded near Westbourne Park tube station in leafy Notting Hill just before dawn.

Danny Rigby, 36, had been fast asleep when he heard a “massive bang” and someone shout “fire”.

He threw on some tracksuit bottoms and raced downstairs to find the burning car outside his building.

The dad-of-two told The Sun Online: “It wasn’t completely on fire at that point so I tried to get to the driver.

“I managed to get the door open and tried to get his seatbelt but it was too f***ing hot. It was just too hot.

“I was shouting and shouting at him to get his belt off so I could drag him out but he didn’t, he couldn’t.”

Despite his best efforts, Danny had to back away “because the flames just got too high”.

“People were shouting at me to get back saying it was going to blow up,” he said.

“I thought if I get in there and get stuck too, I’m going up in flames as well.

“If I’d stayed any longer there’s a good chance I could have.”

Just 30 seconds after Danny stepped away “the whole thing went up in flames”.

He added: “It all just happened very quickly and turned into a big fire ball.”

The welder had been working hard to save the driver and hadn’t noticed the passengers in the back “because of all the smoke”.

But when he opened the door, the plumes came flooding out and it was clear there were two other people stuck in the vehicle. 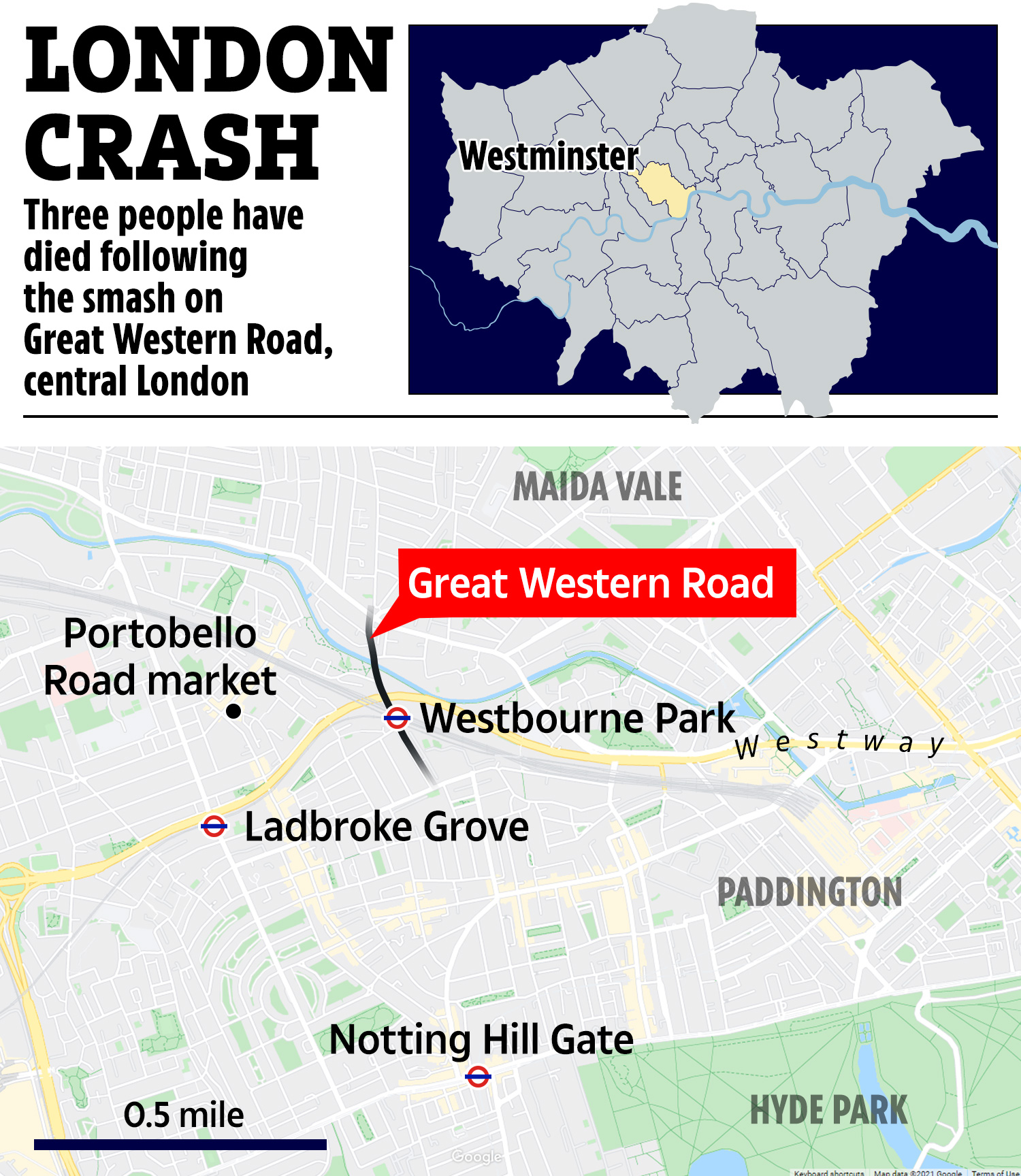 Sadly all three were pronounced dead at the scene, though none have yet been identified, police said.

Brave Danny, who used to be in the Royal Navy, said his girlfriend Leila shielded their nine-year-old son Dan from the horror while he got to work.

But when the youngster heard there was a fire he grabbed his pet rabbit and stood by the front door ready to go, Danny said.

“He was braver than the blokes outside”, he added. “He didn’t want to leave his rabbit Bolly behind.”

Manuel Gaspar, manager of the Transparent World cleaning company, based opposite the crash, praised Danny’s efforts, telling the Evening Standard: “He had just woken up and didn’t have a shirt on and was trying to get into the passenger door.

“The impact was awful. There was debris spread all over the road.”

A police officer at the scene said the driver had come over a canal bridge before losing control of the vehicle.

No other cars are thought to have been involved in the crash, although a number of residents were evacuated from the building as a precaution.

A Met Police spokesperson said: “Police were called at 4.50am after a vehicle collided with a residential block in Great Western Road, near the junction with Harrow Road, Westminster W9.

“The LFB extinguished the fire but, despite the best efforts of emergency services, three people were pronounced dead at the scene.

“Work to identify the deceased and inform their next of kin is ongoing.”

Anyone who saw the car before the incident, or who has information, video or images that could help police, is urged to call 101 ref CAD 917/14 Sept.

Emergency crews were called to the scene on Great Western Road, west London[/caption]

Three people were pronounced dead at the scene[/caption]

What type of cancer did Willie Garson have?