EDDIE HALL has warned Hafthor Bjornsson to expect a ‘broken jaw’ when they clash in the boxing ring next year.

Speaking to Muscle and Health, Hall also rubbished The Mountain’s 6ft 9in height advantage and promised fans: My heart and soul are in this fight.

British behemoth Hall, 33, was due to take on his former strongman rival this month before suffering a detached bicep in training.

Bjornsson, 32, will instead face armwrestling giant Devon Larratt as Hall builds his strength back up.

And it is hoped the former World’s Strongest Man winners will finally collide next year after Hall revealed a dramatic six-stone body transformation.

But despite undergoing surgery in July, The Beast is adamant he remains favourite to win the grudge match.

Indeed, Hall believes he is capable of causing real damage to Bjornsson, who has already clocked up two exhibition fights.

That’s despite being nearly seven inches shorter than the Icelandic giant.


Fury delayed trilogy fight after being beaten up in camp, claims Wilder

WIN a pair of boxing gloves signed by The Beast himself! 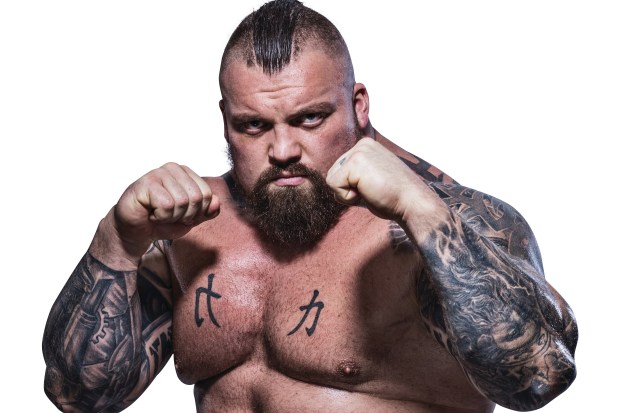 Muscle and Health and The Sun have joined forces to give one lucky reader the chance to get their hands on Eddie's mitts.

What’s more, you’ll get a FREE year’s subscription to Muscle and Health magazine when you enter!

Hall told Muscle and Health: “In the beginning, I think everyone had Thor as the favourite because he’s got the reach and height advantage.

“I think it’s safe to say the public is starting to get that feeling that I’m taking this very seriously indeed and that Thor is going to get a broken jaw.”

Hall has already vowed to KO Bjornsson in Round Three, saying: “My game plan is to combine power, speed, agility, and endurance and I’ve got all four attributes nailed down.

“I can do ten three-minute rounds quite comfortably.

“I think the third round will be the end for him. That’s what I’m aiming for.”

Dimitar Berbatov backs Cristiano Ronaldo over his No.7 desire and says players “fight” over numbers