ENGLAND will try to make history on Sunday — by winning their opening match at the Euros for the FIRST time.

In NINE tournaments the Three Lions have failed to fire – and the nation is praying for this will change on Sunday. 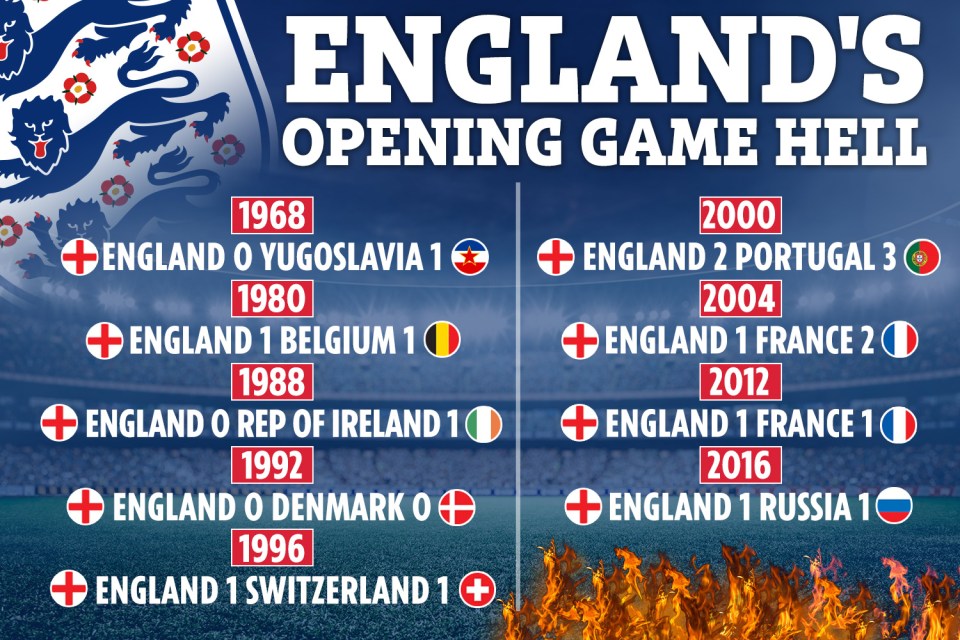 Croatia are the opponents – the side that handed Gareth Southgate and his charges World Cup semi-final heartbreak three years ago.

Following Dragan Dzajic’s winner, Mullery — raging after a rake on his ankle — booted assailant Dobrivoje Trivic where it hurts.

Back in a tournament for the first time since the 1970 World Cup.

Ray Wilkins opened the scoring in Turin when he chipped the Belgian defence and lofted home but Jan Ceulemans levelled seconds later.

Wilkins fired England ahead with a sumptuous chip[/caption]

Bobby Robson’s men went to West Germany among the favourites — and lost all three group games.

Ray Houghton steered home a header after a Kenny Sansom miscue was nodded on by John Aldridge.

With Yugoslavia banned, the Danes got a late call-up — but England looked like they had come ‘off the beach’.

John Jensen’s slow-motion shot hit the post and trickled into Chris Woods’ hands in this dull affair in Malmo.

England toiled in a dull 0-0 draw with Denmark[/caption]

But England lost their way at Wembley and the Swiss equalised from the spot after Stuart Pearce handled.

Shearer ended a barren run with a blasting goal[/caption]

Kevin Keegan’s side made a flying start and were 2-0 up after 18 minutes in Eindhoven.

Paul Scholes missed a chance for his second before Luis Figo took control, with Nuno Gomes slamming in the winner before the hour.

Sven-Goran Eriksson’s men blew it in three minutes of injury time in Lisbon.

David Beckham missed a penalty after Frank Lampard’s opener. Zinedine Zidane levelled and then won it from the spot in added time.

James Milner had rolled the ball wide of a vacant net before Joleon Lescott’s header in Donetsk.

But they could not hold on to the lead as Samir Nasri was given time and space to pick his spot from 20 yards.

Another lead blown in injury time after playing some outstanding football in the first half in Marseilles.

Eric Dier’s free-kick soared into the net with 17 minutes to go but Vasili Berezutski struck in added time.

Dier rocketed home a free-kick, but England were pegged back[/caption]

Stimulus check update: Here’s why your stimulus payment is delayed and what you can do to claim your cash

What is the Eden Project and how do I get tickets?