ENGLAND welcome Germany to Wembley on Tuesday with a spot in the Euro 2020 quarter-finals at stake.

But there will also be a healthy dose of pride on offer for two nations with a long and fascinating history of footballing rivalry. 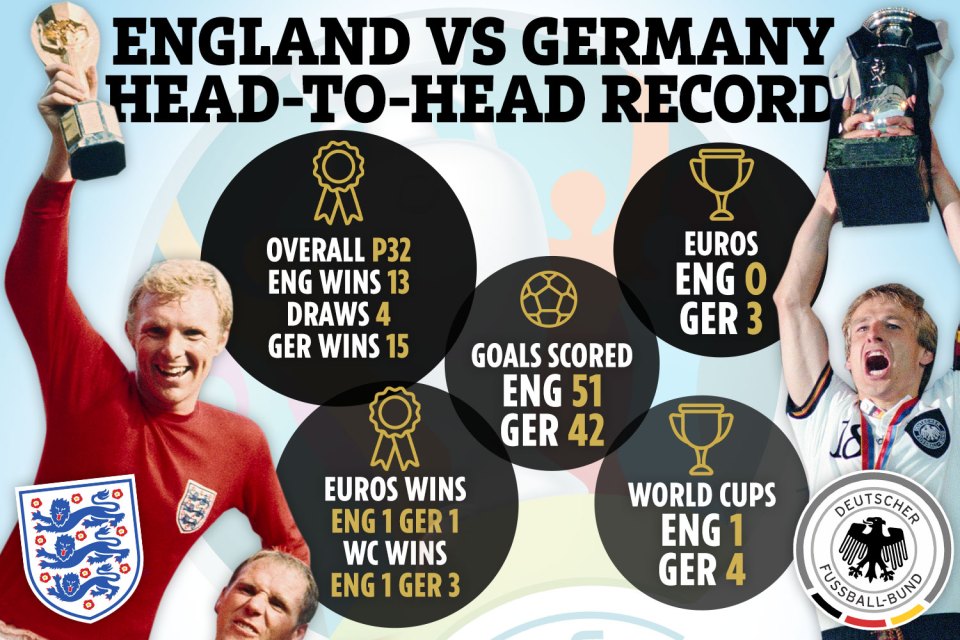 An inaugural 3-3 draw in May 1930 was a strong hint of what was to come as the first four meetings between the pair threw out 22 goals.

During this period, England‘s dominance showed with seven wins in a row — including an infamous visit to Berlin in 1938 – that culminated in the 1966 World Cup final.

Geoff Hurst’s hat-trick at Wembley may have had a helping hand from a potentially dubious goalline decision (more of that later) but etched his name into English folklore.

To this day, that 4-2 win at Wembley marks the Three Lions’ only World Cup triumph.

Fresh off that historic victory, England had to wait nine years for another as they lost three of their next four encounters.

That included an extra-time defeat in the 1970 World Cup quarter-finals and a two-legged exit in the final round of qualifying for Euro 1972.

The next five meetings, including a 0-0 draw in the 1982 World Cup second group stage, were evenly shared before German dominance took hold. 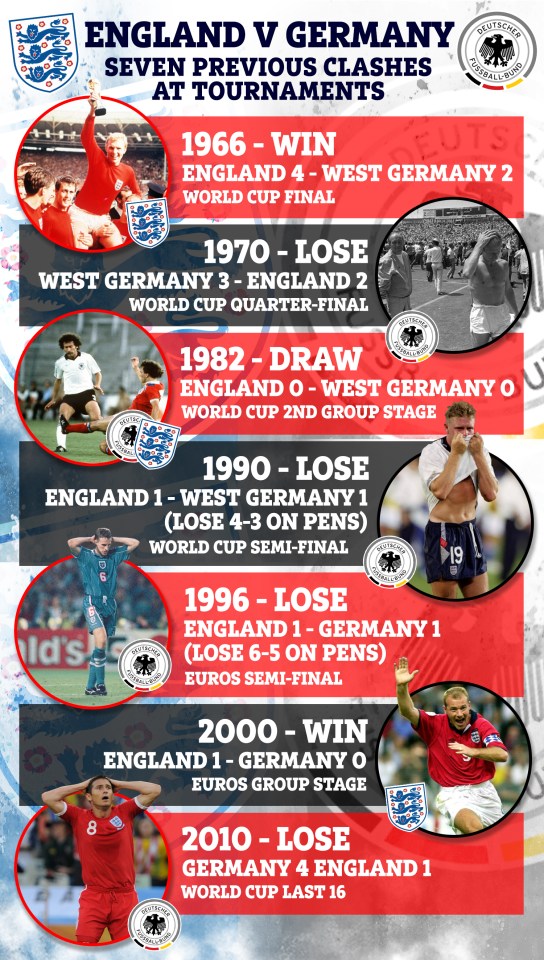 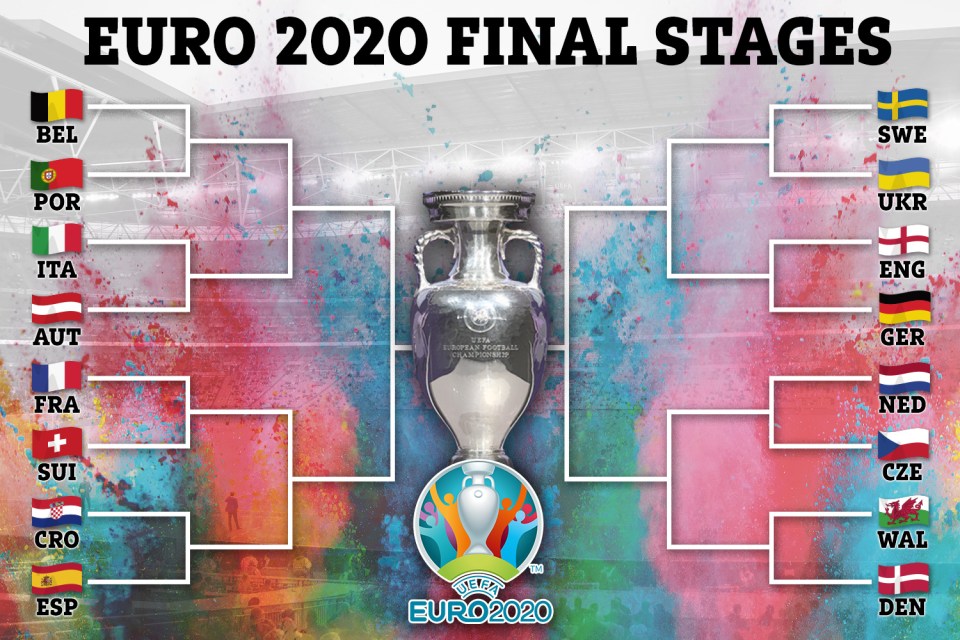 An English victory in the 1985 Azteca 2000 tournament was their last of the century and preceded five consecutive defeats.

Among which were the 1990 World Cup semi-final, taken to penalties thanks to Gary Lineker’s late equaliser in Turin.

But misses from Stuart Pearce and Chris Waddle set in motion a long story of Three Lions shootout failures.

Fast forward to Euro 96 and a similar scene was set, this time at Wembley for a place in the final on English turf.

A 1-1 draw gave way to 11 successful penalties in a row before Gareth Southgate’s effort was comfortably saved by Andreas Kopke to hand the Germans victory.

England would lose in their next four major tournament shootouts before Southgate, as manager, oversaw a 2018 World Cup triumph over Colombia.

The turn of the century heralded plenty more iconic match-ups.

Alan Shearer netted the only goal as the Three Lions helped knock Germany out of the Euro 2000 group stage – before dramatically following them.

Dietmar Hamann scored the last-ever goal at the Old Wembley in a 2002 World Cup qualification victory for Die Mannschaft before England’s revenge in Munich 11 months later.

A stunning Michael Owen hat-trick earned a 5-1 victory and remains the only time the sides have been separated by four goals.

And their most recent major tournament clash came at the 2010 World Cup.

Frank Lampard looked to have put England level in Bloemfontein – only for the linesman to miss the ball crossing the line – before Fabio Capello’s side crumbled and lost 4-1.

Four friendlies have come and gone since, which Germany have claimed by two wins to one. 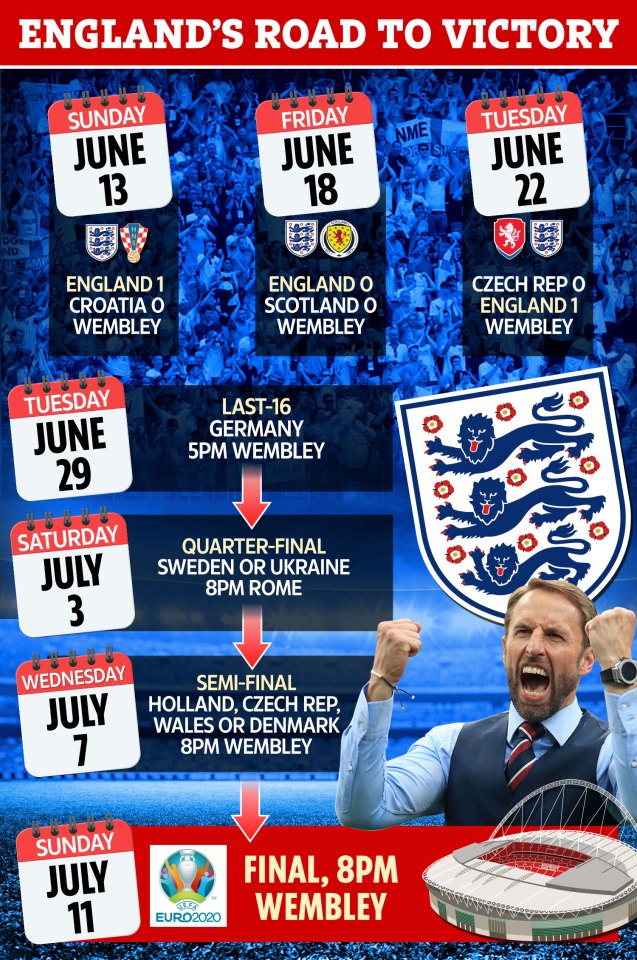 WISH YOU WERE HERR… NOT

That leaves the overall total, from 32 matches, to read England: 13 wins, Germany: 15 wins, and draws: four.

The Three Lions have the edge in terms of goals scored, with 51 to 42, yet the Germans will happily boast seven major trophies to one.

Will that change next week? Tuesday’s 5pm kick-off could well be the next step in a glorious summer for one of these teams.

Man Utd board ‘terrified’ to sack Solskjaer and bring in replacement in case it turns out like Mourinho, says Carragher

I had therapy for depression and counsellors laughed in my face, says Jack Dee

What is Heather Rae Young’s net worth?