THE SEE-THROUGH and naked dresses have been popping up throughout the last few years on Red Carpets.

However, it has now become a closet staple for some celebrities who have incorporated the sheer trend into their everyday wardrobes.

Kim Kardashian, 40, was one of the first women to incorporate the see-through dress trend into her wardrobe.

After sporting it for the first time in 2016 for a Paris Fashion Week ensemble, she has since been spotted multiple times.

One of her most stunning pieces was this full bodysuit that only left little to the imagination. She complimented the look with a beret.

Of course, the Kardashians followed in the steps of their sister as they have also been spotted in see-through looks.

Khloe, for example, rocked two similar dresses this past year: one in light blue that complimented the 37-year-old’s features and another in beige that showed off her stunning figure.


I’m a proud ‘hotwife’, I’m married but have sex with other men – my man loves it


I asked for layers at the hairdresser, it was a disaster & worse a second time

IT'S IN THE BAG

Kourtney Kardashian, 42, recently wore a stunning floral piece that kept Travis Barker’s hands all over her.

The mom of three only covered her assets with a black thong and crop top.

The 25-year-old supermodel turned heads when she stepped onto the Met Gala stairs with an Audrey Hepburn-inspired dress decked out in pearls and diamonds.

However, Kendall made the risque choice to have the dress be see-through, a daring choice for such an elegant event.

This past month, Kylie finally confirmed that she was expecting her second child with boyfriend Travis Scott.

And unlike her last pregnancy, the 24-year-old mom has made sure everyone sees her growing belly as she rocks daring outfits consisting of crops tops and low-rise jeans, and the occasional see-through dress.

Similar to her older sister Kim’s dress, Kylie only wore black underwear under her body and let her long fur coat cover the rest.

Cardi B, 28, has been the naked dress’ biggest fan as she has been spotted several times with such daring outfits.

The now mom-of-two didn’t shy away from the trend as she wore a leopard-print outfit while pregnant.

Megan Thee Stallion, 26, has absolutely no shame in showing off her amazing curves as she has now rocked the trend twice.

For a night out, she rocked a full body suit that enhanced her best curves – and after, she shocked fans as she wore a see-through dress with high-slits on both sides.

Chrissy Teigen, 35, stepped out with her husband John Legend for a night out in the town with a stunning and elegant version of the see-through trend.

The mom of two made sure to cover with matching black underwear and bra before adding a pair of boots to her flowy black dress.

Jordyn Woods celebrated her 23rd birthday by simply wearing strings of diamonds over her naked body.

The young model had everyone snapping pictures of her as she simply wore the draped diamonds and nude underwear paired with clear heels. 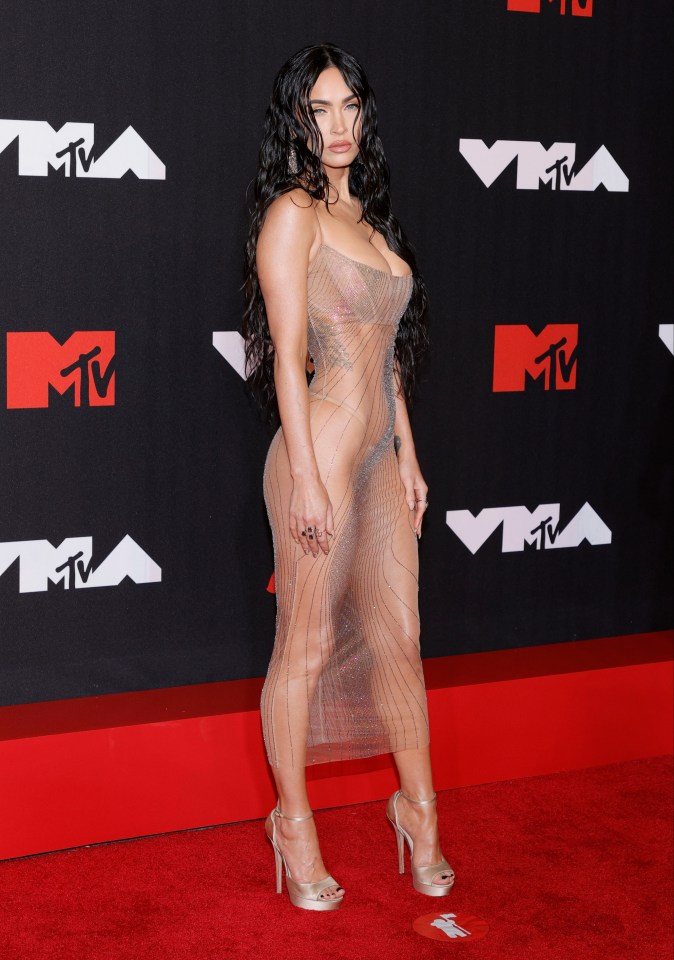 Megan Fox, 35, is in the best shape of her life these days and she was not afraid to show off her body during the VMA’s.

The actress, who claimed her boyfriend Machine Gun Kelly came up with her dress idea, simply wore a nude mesh over her naked body with a nude thong.

The 32-year-old actress also stepped onto the Met Gala stairs with a very naked look.

Zoe Kravitz only wore a pair of diamond-encrusted underwear and a sparkly mesh on top, but sadly, her outfit was criticized for how “naked” she looked.