GARETH BALE is smiles better because he’s relaxed and having a laugh with his Wales pals.

The smile is back on Gareth Bale’s face[/caption]

Bale proved the Euros catalyst for Wales once again with two assists in Wednesday’s vital 2-0 win over Turkey.

The Real Madrid superstar, 31, looked back to his best following an indifferent season on loan at Tottenham.

While his time in recent years at the Bernabeu under ex-boss Zinedine Zidane appeared toxic.

And, although he even skied a horror second half penalty, jubilant Bale hailed a job well done after Wales all but booked a last-16 spot ahead of Sunday’s clash with Italy in Rome.

Ex-Arsenal, West Ham and Celtic forward Hartson, 46, said: “Gareth loves playing for Wales and he plays with a smile on his face.

“Martin O’Neill always said at Celtic, ‘Brian Clough used to tell the lads to relax. You cannot play football when you are tense’.

“And he won two European Cups at Nottingham Forest.

“When Gareth comes away with Wales, you can clearly see he always has a smile on his face, feels very relaxed among the players and his great mates that he’s come all the way through with.

“He thrives in that environment and he’s still a world-class player – he has an awful lot to offer.

BETTING SPECIAL: GET CRISTIANO RONALDO TO SCORE VS GERMANY AT 30/1

Bale is starting to find his best form again[/caption] 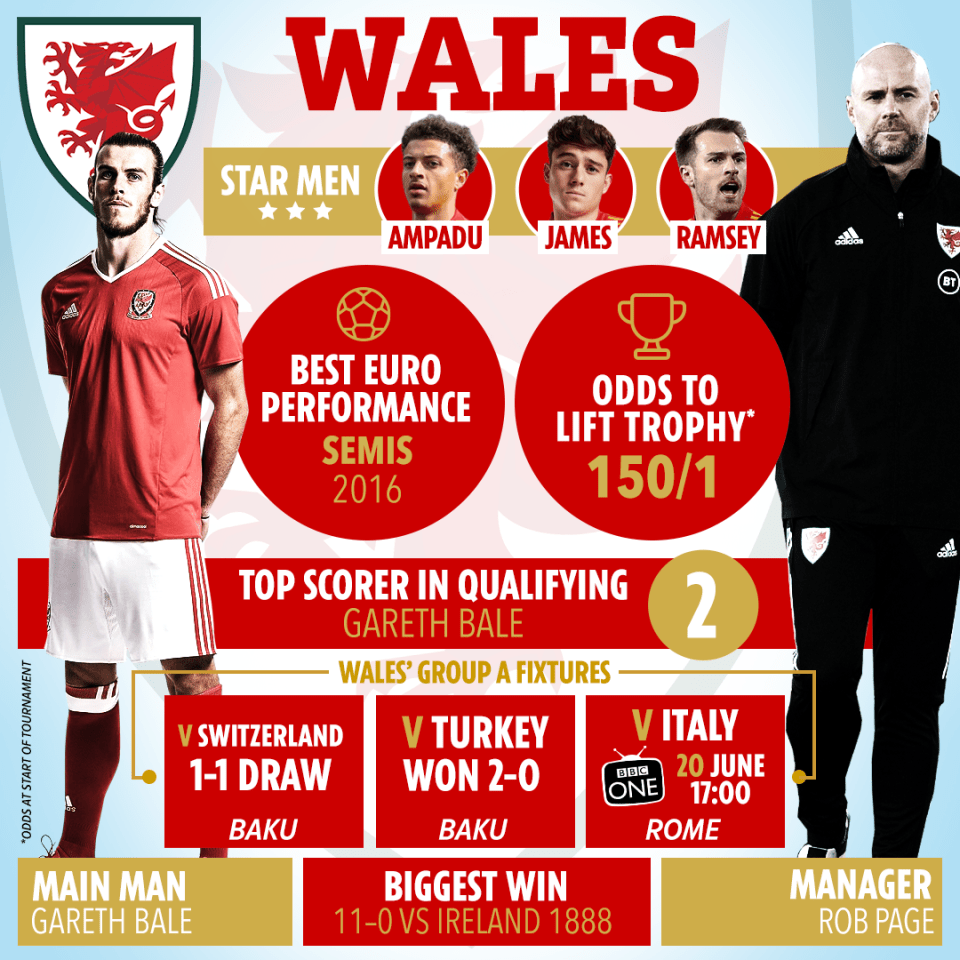 “He’s dynamic and when he gets on the ball he generally makes things happen. Not all of the time but most of the time he can do something special.”

Bale certainly did that against the Turks in Baku with a sublime pass to set up Aaron Ramsey‘s opener.

And, after his shocking pen miss, the Wales skipper rallied to show courage and bravery to drive at the Turkish defence for Connor Roberts’ second in the fifth minute of injury time to seal a landmark win.

Next up for Bale and co is Sunday’s final Group A clash with Italy in Rome.

With the euphoria sweeping through Wales again following their Euro 2016 semi-final success, Dragons fans are dreaming of a repeat of that golden summer under Chris Coleman in France.

Hartson was part of the Welsh side which famously beat Italy 2-1 in 2002 thanks to goals from Simon Davies and Craig Bellamy in Cardiff.

And the 51-cap hitman sees no reason why Robert Page’s side cannot replicate that triumph at the Stadio Olimpico to win the group and land themselves a last-16 tie at Wembley next Saturday.

McDonald’s Fun Football ambassador Hartson, who is encouraging local communities across the UK to nominate their grassroots heroes, added: “If you get Bale and Ramsey performing, Joe Allen sitting in front of the back four.

“Dan James causing havoc down the left and Kieffer being awkward and unfamiliar for these defenders to play against, Wales can beat any team. They have offensive players with real pace and talent.

Spirits are high in the Wales camp[/caption]

“When I played Italy that night I was against [Fabio] Cannavaro and [Alessandro] Nesta. They didn’t know what hit them because they have never faced a John Hartson type before.

“Somebody who was going to have their elbows all over them, two stone heavier than them, leaning against them, making it difficult and they probably thought, ‘Jesus, what the hell are we going to do here?’

“And we managed to beat them.

“Kieffer gives you something similar to that. Italy will be favourites. But look at what we did in 2016. No one gave us a chance of getting to the semi-final. We have momentum.”

With qualification almost certainly in the bag, Page needs to decide whether to rest players for the knock-out stages.

The Wales boss has three players – Ben Davies, Chris Mepham and main striker Kieffer Moore – one yellow card away from a ban.