LET’S face it, Hollywood has set the bar high when it comes to what sex should actually look like – but doing the deed can sometimes be more effort than it’s worth.

Just ask this randy couple who found themselves in a very unfortunate situation when they literally got stuck together while getting it on.

To say they were inseparable is an understatement as TikTok user Crystal Ship Kelly detailed the horrific moment a man’s willy piercing got lodged inside of her.

Setting the scene, Crystal, who regularly shares raunchy clips of herself on OnlyFans, explained that she was “on top” when the incident occurred, which left the bloke “screaming in pain.”

Crystal teased the intimate detail in a clip on TikTok where she explained some interesting facts about her life.

After revealing she is from the Midlands and “sounds like I’m from Peaky Blinders,” the brunette bombshell admitted that she once “got a c*** stuck inside me.”

Writing in the on screen caption, she said: “He had a prince albert piercing and it attached to something inside me. He was screaming in pain.”

A Prince Albert piercing is the name given to a piercing of the penis, in which a metal ring is pierced through the skin at the tip of the willy.

It’s believed the piercing could increase sensitivity in the penis, and can also help boost female orgasm – but on this occasion, it wasn’t her screaming, but him.

Responding to a comment from a TikTok user who seemed baffled by the encounter, Crystal explained the situation in more detail.

Bag a Beauty Bargain with Fabulous' Latest in Beauty Box! 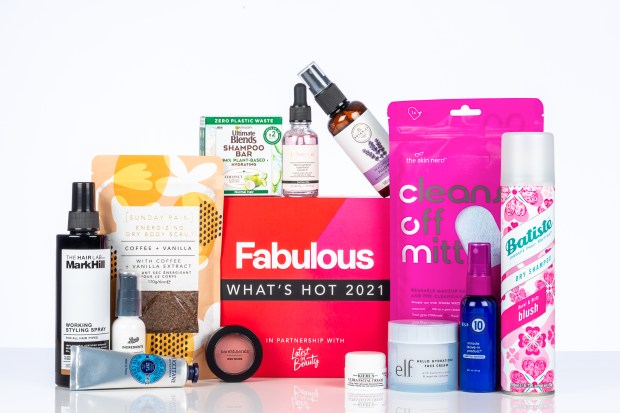 Looking to raise your beauty game this year? We’ve teamed up with Latest in Beauty to bring you the very best products around in our What’s Hot 2021 beauty box.

Featuring the latest “IN”gredients, eco innovations and cult classics you won’t want to be without, our edit is the perfect way to upgrade your arsenal.

Amused, she said: “I had so many questions about this. But no, it didn’t hurt me at all, it just hurt him.”

She then made a sucking motion with her hands to indicate the moment they realised they were quite literally stuck together.

“We kind of just went… and got stuck” she continued.

“When I tried to get myself off, because I was on top.. I can’t believe I’m talking about this on TikTok…

“When we finally did separate, his thing was still in place, everything was fine, there was no cut or anything.”

While viewers were desperate to know more about how they became attached, and then detached, Crystal said “it was dark and we don’t know what happened.”

Crystal also revealed that she has an OnlyFans account[/caption]

She jokingly asks if there are “any doctors on here” in hope to finally get some answers herself.

We aren’t sure how long it took her to wiggle her way off either, but we can imagine the panic running through each of them – ouch.

Naturally, viewers found the horrific incident both hilarious and terrifying.

“Omg could you image going to A&E both on the same trolley,” one person joked. Adding: “I’m filled with fear.”

A number of “fellow Prince Alberters” admitted they have never experienced “getting stuck,” despite having a genital piercing of their own.


Harry & Jill Biden's close bond – they 'spend too much time' together


June 11: Stop making excuses for why love can’t work and make sure it does

For more sex horror stories, a woman revealed that she ended up in hospital after she had sex with her husband on the washing machine and it gave her a seizure.

And this woman ended up in hospital after her husband gave her a vajacial with habanero peppers.

Plus this woman ended up in hospital after she used a yam as contraception.

Happy Mondays star Bez turned down Julia Roberts when she invited him back to hers, Shaun Ryder claims