By David Coverdale For The Daily Mail

As Tokyo celebrates 100 days to go until the Olympics, Adam Peaty gets his own countdown underway on Wednesday with a race against his main gold medal rival.

The scene for the battle of world’s best breaststrokers, though, is not an all-star international event – but the behind-closed-doors British Swimming Selection Trials in London.

James Wilby is the man bidding to knock the seemingly unstoppable Peaty off his perch, having taken silver behind his team-mate in the 100m breaststroke at the 2019 World Championships with the third fastest time in history. 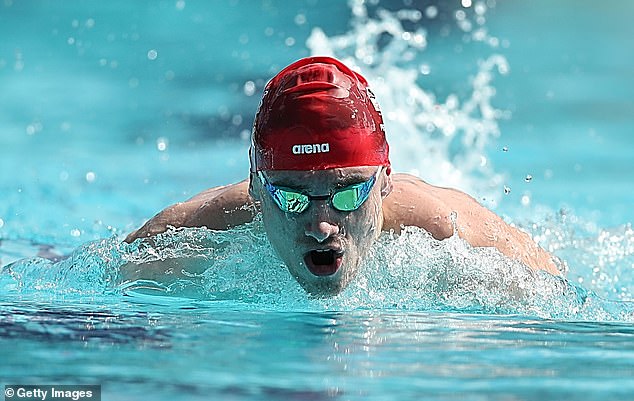 That British one-two in South Korea means Peaty and Wilby have both already secured their Team GB spots for Tokyo going into this week’s Olympic trials.

But their race still promises to be the highlight of the first of five days of competition at the London Aquatics Centre – and Wilby insists he will not settle for second, now or in Japan.

‘Every athlete in the end can be beaten at some point,’ says the 27-year-old about his prospects of taking down the world-record holder and Olympic champion.

‘The classic one I think of is Michael Phelps. At Rio 2016, the three of those absolute legends (Phelps, Laszlo Cseh and Chad Le Clos) got joint silver in the 100m butterfly and Joseph Schooling got the gold. 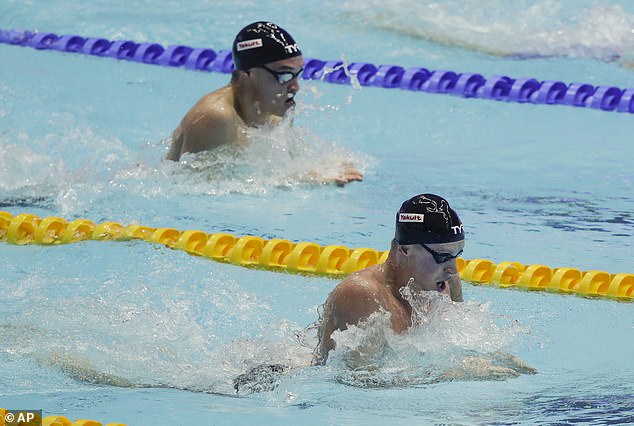 ‘Whenever people say “so and so in this event is untouchable”, I always reflect on that one and think everyone can possibly be beaten, even if it takes the perfect race.’

It may take even more than that given Peaty has not lost a major 100m race in an Olympic-sized 50m pool since his senior debut in 2014. His long-course world-record time of 56.88 seconds is also more than a second and a half quicker than Wilby’s personal best.

‘It is challenging,’ adds Wilby on his rivalry with Peaty, who trains at the same pool in Loughborough but under a different coach. ‘He’s the best in the world but it helps that he’s in Britain and he’s just over the lane ropes. If someone is going to be further up the rankings, you want it to be someone from Great Britain.

‘Having him there is both an element of competition and also an inspiration. When we get to the international stage, we are racing each other, but it’s also “can we get the GB flag one and two?”.’

Unlike Peaty, Wilby is also competing in the 200m breaststroke in London in preparation for a medal attempt in the longer distance at the rescheduled Tokyo Games, which begin in 100 days’ time with coronavirus countermeasures in place. 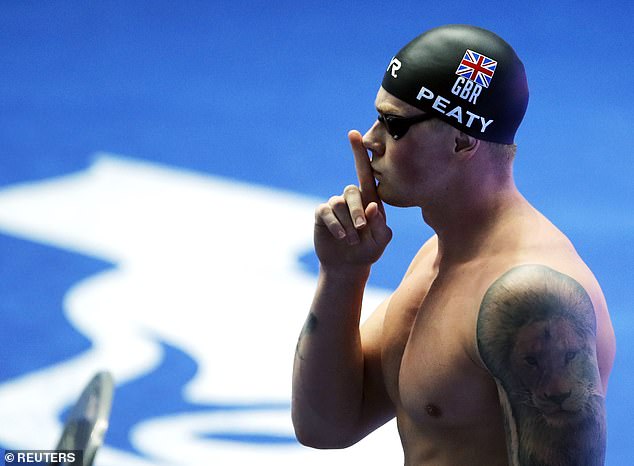 ‘When it gets below the triple figures of days, it gets really real and it’s almost like looking down the barrel of a gun and we are ready to get racing,’ says Wilby. ‘It is just exciting to see it finally happening.

‘Being pre-selected for the team is incredibly nice, but I still want to go to the trials and swim really fast times and set the stage for myself for the summer.

‘Some of the things that make the Olympics the Olympics aren’t going to happen, which is a real shame. But if that is what we have to do to be safe, I don’t see it getting in the way of the actual performance.’

Team GB won six swimming medals in Rio, their best Games since 1908, but Wilby thinks they could top that in Japan. ‘We haven’t had a big summer competition for two years so by the time we get to the Olympics I’ll be all guns blazing, as I’m sure everyone else will be,’ he adds.

‘I think there’s an element where almost no predictions can be made. There are some wild cards out there and some dark horses.

‘But there’s the prospect of dark horses coming through for GB, swimmers popping up who you wouldn’t have predicted 12 months ago, 18 months ago. It’s a bold statement but I think our medal tally in Rio could potentially be threatened.’