A MARINE general has been fired after a “preventable” training accident off the California coast left nine troops dead.

The training accident 70 miles off San Diego’s coast was one of the deadliest for the Marines in recent years. Leaders said it could have been prevented.

Castellvi was the former Commanding General of 1st Marine Division.

An investigation by the maritime branch found the accident July 30 off San Clemente Island was caused by inadequate training, shabby maintenance of the 35-year-old amphibious assault vehicles and poor judgment by commanders.

It said Castellvi “bears some responsibility.” Castellvi could not be immediately reached for comment.

During routine training on July 30 near San Clemente Island, the amphibious assault vehicle (AAV) they were in began taking on water – with 15 marines and one sailor on board.

Seven of the Marines on board were rescued and are alive while one was killed after the vehicle sank around 5.45pm.

Two of the rescued Marines are in critical condition at Scripps Memorial Hospital La Jolla while the other five are back aboard their assigned ships, Gen. David Berger said.

A search continued for the remaining missing seven Marines and one sailor – but tragically it was declared they are presumed dead. 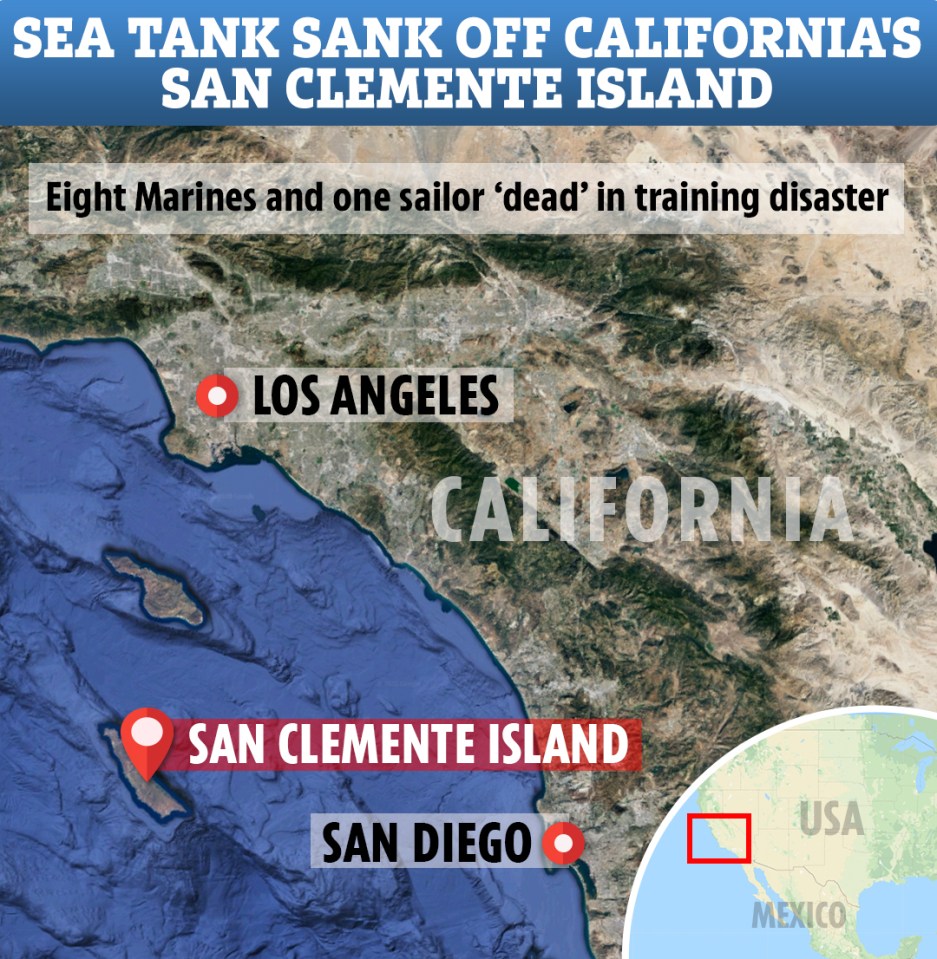 Col. Christopher Bronzi, 15th MEU Commanding Officer, said in a press release: “It is with a heavy heart, that I decided to conclude the search and rescue effort.

“The steadfast dedication of the Marines, Sailors, and Coast Guardsmen to the persistent rescue effort was tremendous.”

Searching was ceased as both the MEU and Makin Island Amphibious Ready Group (ARG) determined there was “little probability of a successful rescue.”

The 15th MEU is based at the Marine Corps Camp Pendleton training centre on the West Coast.

All but one of the 15 service members training in the amphibious vehicle were Marines, while the other was a sailor.

The 30-ton tracked AAVs are armored personnel carriers used to get Marines from ship to shore.

More than 1,000 square nautical miles were searched by the Marine Corps, Navy, and and Coast Guard.

“Our thoughts and prayers have been, and will continue to be with our Marines’ and Sailor’s families during this difficult time,” Bronzi said.

“As we turn to recovery operations we will continue our exhaustive search for our missing Marines and Sailor.”

What happened to bicyclists in Show Low, Arizona?