Home News Most Brits believe MPs had plenty of time to discuss Brexit despite...

MOST Brits believe MPs had plenty of time discuss Brexit despite the Supreme court judges’ ruling against Boris Johnson, a poll has found.

Sixty per cent of voters think Parliament should get on with leaving the EU – including 35 per cent of 2016 Remain voters. 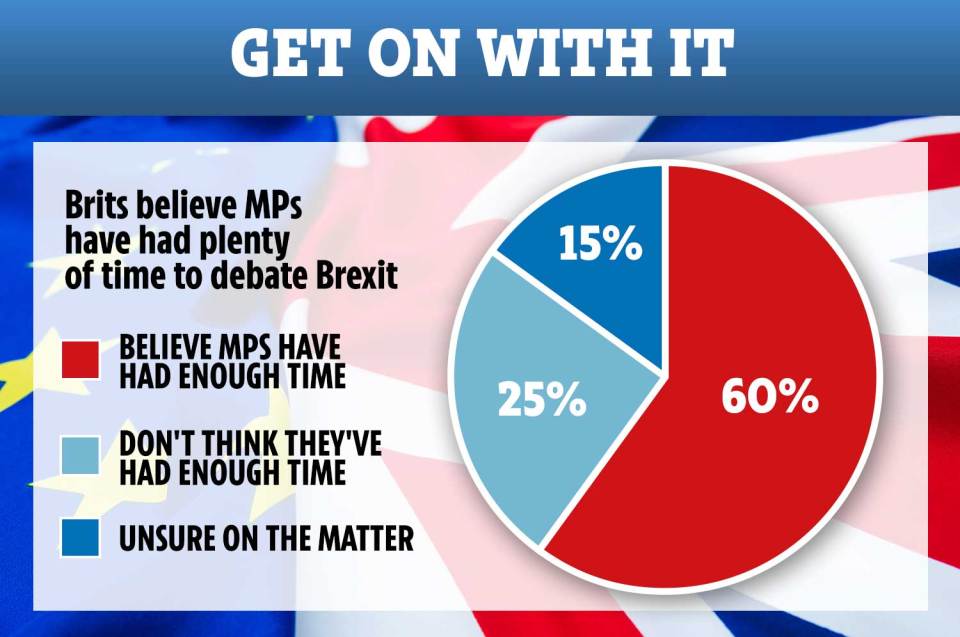 WE’LL BE THE JUDGE

Thirty per cent of Brits said they were frustrated after the Supreme Court ruled the PM’s parliament shutdown was unlawful.

While 11 per cent said they didn’t care either way, the Telegraph reports.

While Jeremy Corbyn calls for Boris to quit over his shutdown – Brits appear to be angry with all of the Commons.

The poll found 89 per cent of people said “all of Parliament” were to blame over the lack of progress in Brexit.

Boris has been blasted across the House for his dramatic move to stop MPs from sitting for five weeks.

Remainers claimed he suspended Parliament to avoid scrutiny over Brexit – while No10 said it was to announce a new legislative agenda with a Queen’s Speech.

But despite the chaos caused it appears Mr Johnson has dodged the ire of most Brits.

The PM was held less responsible for the Brexit crisis than Theresa May or David Cameron.

Boris garnered 69 per cent, while Mrs May topped the list with 82 per cent, Mr Cameron 77 and Mr Corbyn with 71 per cent.

Boris landed back in London today and will face angry MPs this afternoon with questions over his shutdown and Brexit.

MOST READ IN POLITICS


New pressure on BoJo over ex-model, 34, as 4th taxpayer handout worth £12K emerges

It is believed the PM will call for an election tomorrow while senior Cabinet ministers advised him to suspend Parliament again.

A Government source said: “We are in truly uncharted territory here.

“Proroguing Parliament again would not be without risk, but every time the courts and others try to stop the Prime Minister, it reinforces the point that the Government is fighting a lone battle to carry out the will of the people.”

Deadwater Fell episode 3 RECAP: Did Tom’s mental abuse of his wife Kate cause her to slaughter her family?

Ulrika Jonsson takes to Instagram to launch blistering attack at her own BOOBS by saying they ‘get on my t*ts!’

Deadwater Fell episode 3 RECAP: Did Tom’s mental abuse of his wife Kate cause...

THE plot thickened on episode three of Deadwater Fell when Tom was charged with his family’s murder. However, Steve has been withholding vital evidence...

THE first Grand Slam of 2020 has reached the weekend as the Australian Open continues despite the ongoing bushfire troubles. Roger Federer survived a...

A large numbers of emergency vehicles and heavily armed officers sealed off the area. (Representational)Frankfurt am Main: A 26-year-old man is believed to...

Ulrika Jonsson takes to Instagram to launch blistering attack at her own BOOBS by...

ULRIKA Jonsson has lashed out at her own boobs — saying they “get on my t*ts”. The Swedish-born TV host, 52, told how she...

Fighting For Those Who Have "No Voice": Trump At Anti-Abortion Rally

WASHINGTON: US President Donald Trump addressed the country's biggest annual anti-abortion rally on Friday as members of the Senate sat in judgment just...

Clocks go back: Will my iPhone update automatically – Will my...

Deadwater Fell episode 3 RECAP: Did Tom’s mental abuse of his wife Kate cause...