Wales’ Grand Slam dreams are still alive after a 40-24 win over England in Cardiff saw them secure the Triple Crown.

Josh Adams, Liam Williams, Kieran Hardy and Cory Hill scored tries for the hosts, while Anthony Watson and Ben Youngs went over for the visitors.

Sportsmail provide the player ratings for both sides after a frenetic and fiery encounter. 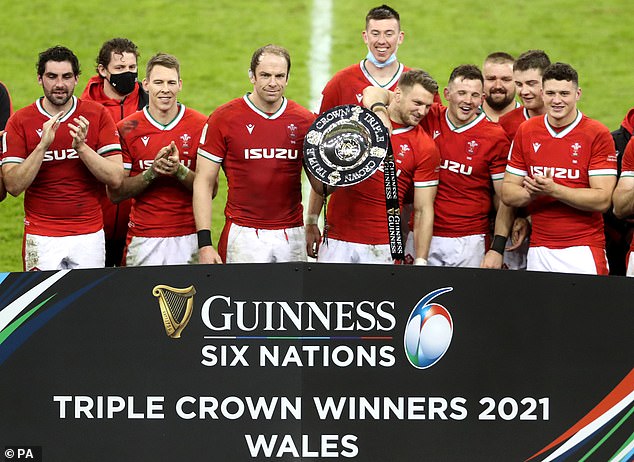 Saved Kieran Hardy’s bacon early on and crossed for opportunistic second score when he beat Owen Farrell to the ball. One brilliant turnover before half time. 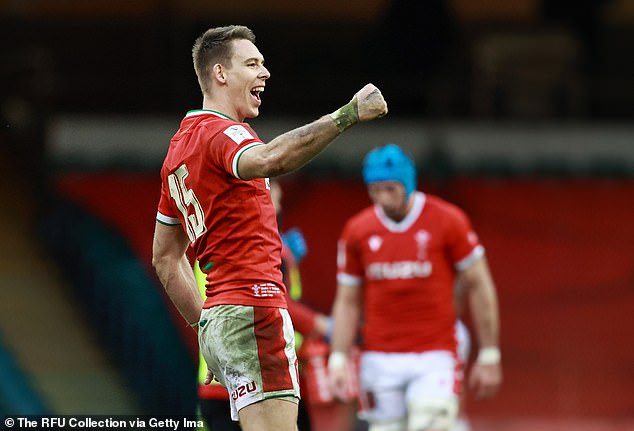 Didn’t collect the ball in the build-up to Williams’ try and whether he knocked on or not, he was at least live to the chance. Not much influence apart from that, but never stopped working.

Made rugby history by becoming the youngest player to win 100 caps for his country. Bad defensive read just before half time but very physical and did plenty of donkey work.

His future looks to be at inside, rather than outside centre. Solid enough but didn’t have much room to attack. Replaced by Willis Halaholo early in the second half.

Back in the side after two-game ban for breaching lockdown rules and was immediately on the scoresheet with yet another try which he did well to claim. 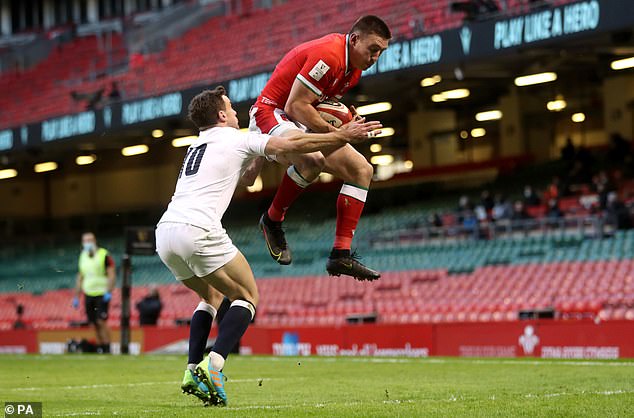 Was targeted by England early on as he is a volatile character, but did brilliantly to take quick penalty and kick to Adams for his try. Replaced early in the second half and looked injured.

Only his fourth cap and was he charged down early on. He was clearly a target for Maro Itoje, but did brilliantly to take quick tap and score his try.

Gave away a free-kick at scrum time in the first half and was also penalised for being offside. Failed to stop Ben Youngs for England’s second try.

He would want the line-out to be better than it is, but his return to the side has helped in that area and he worked hard throughout. His leadership is also vital to the Wales side. Replaced by Elliot Dee.

Strong scrummager but had a right old tussle with Mako Vunipola which probably ended about even. Worked hard for 67 minutes before Leon Brown came on.

Mixed first half of one stolen line-out, a couple of penalties, and some decent involvement in the loose. On the whole his return to the Wales side has been positive. Replaced by Cory Hill who grabbed match-winning try.

Remarkably, this was his 23rd consecutive Test against England. Managed the referee much better than his opposite number Owen Farrell and worked like a hero to lift Triple Crown.

Has had real trouble with injury including a nasty concussion, but his ability to return and go straight into Test rugby is remarkable. Will only improve the more he plays.

He is the complete rugby player, but he has shown in this Six Nations he can do all the dirty work too. He has tackled himself into the ground in the three games so far. A pivotal figure.

He is a sight to behold in the wide channels and his footwork is impressive. He is in fine form and outshone Billy Vunipola. Man of the match. 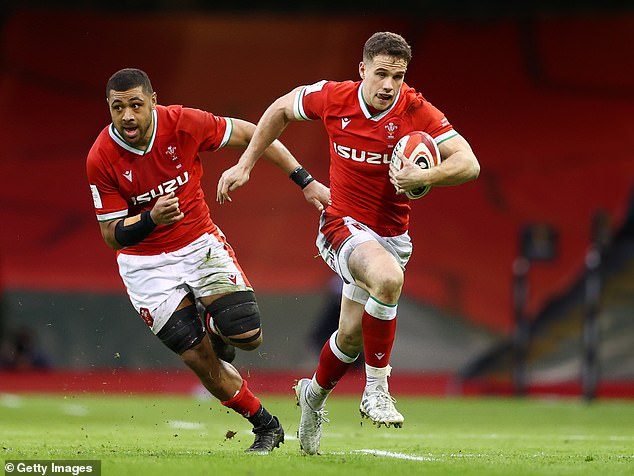 Won his 50th cap and reminded us what got him to that landmark after an indifferent run of games. Second half knock on spoiled it.

Defended well and superb finish for England’s first try in 36th minute and not his fault he was out of position for Wales’ first score. Pin that on the ref. 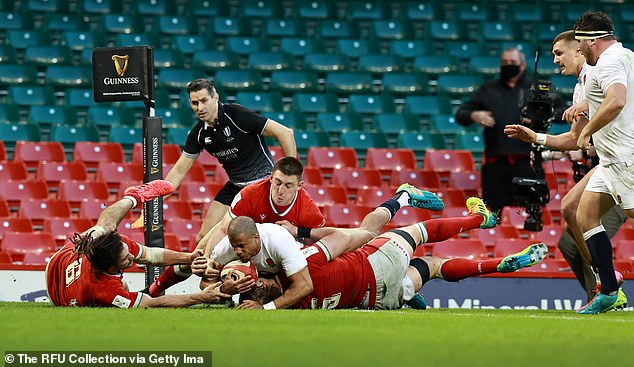 Great to see him finally hitting an outside line for England in the first half like he does for Exeter every week. Defended hard.

Justifiably fuming over Wales’ first score but much better from the England skipper and got to 1,000 points for his country.

Couple of poor kicks when England were chasing the game, decent apart from that, and put in one try-saving tackle in the first half.

Much more of a running game from the veteran scrum-half and his try in the second half capped a bounce back to form. 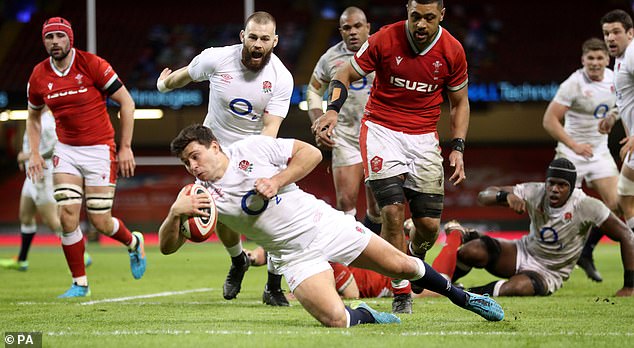 Steady as you go from the father of the England pack. Did his job at scrum-time and got around the park well and a dozen tackles.

Hit his jumpers in the line out and showed up well in the loose again after being benched for the Italy game.

Put in another decent shift, carried and scrummed well. Clearly picking up tips from Welsh guru Adam Jones at Harlequins.

Typical early charge down but yet again penalties count against him. Plays on the edge but crossing it too often at the moment.

Clumsy clear out in ruck led to penalty that opened the door for Wales’ third score. Replaced in the 58th minute.

Put in his carries and England lost nothing by him being promoted to the starting line up. Like a poor man’s Richard Hill and that’s not bad.

One of Eddie Jones’ Kamikaze kids put himself about and made some crunching hits. A British & Irish Lion wherever that happens.

Admitted he had been playing rubbish in recent games ahead of this match but got on the front foot. Welcome back Billy, nearly there. 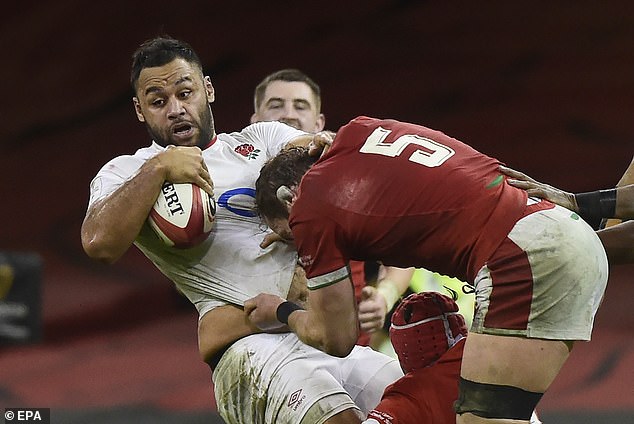 Billy Connolly snaps at wife 'reading him' - 'I don't conceal anything'