STIMULUS checks “could be here to stay and even replace social welfare handouts,” one financial expert has suggested.

An assistant professor of finance at Stony Brook University and blogger wrote an op-ed about “Bidenomics,” noting that this president will probably be known for his “cash benefits.” 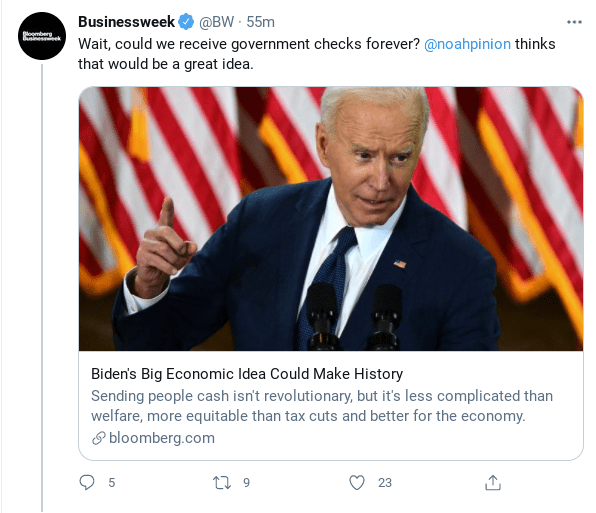 In reaction to the Bloomberg article, Businessweek tweeted Noah Smith asking: “Wait could we receive government checks forever? @noahpinion thinks that would be a great idea.”

Throughout the piece, Smith points out the benefits of the three pandemic payments and the $3,600 child tax credit as Democrats push for a fourth to be rolled out.

He wrote: “Cash benefits are a best-of synthesis — they combine the Great Society’s compassion for the poor, the New Deal’s focus on providing security to the middle class, and the simplicity of Reagan’s tax cuts.

“Mailing people checks might feel like a revolution, but really it’s just one more evolution in America’s long-running quest to find better ways for the government to provide for the general welfare.

“If there’s one enduring idea to come out of Bidenomics, it’s a good bet that cash benefits will be it.”

Smith points out the benefits of the three pandemic payments and the $3,600 child tax credit[/caption]

The financial expert noted that the three payments went to “a broader cross-section of the populace than traditional unemployment insurance.”

“These cash benefits were a smashing success — income and consumption actually rose despite the huge wave of unemployment, and the programs didn’t entice people into quitting their jobs,” Smith wrote.

“Now the pandemic relief programs are ending, but the idea of cash benefits has remained as a central element of President Biden’s economic plans.

“Most importantly, the monthly child allowance of up to $3,600 a year per child, if it becomes permanent, is projected to cut child poverty in half.”

“The less conditional cash benefits are on income, the less they discourage people from working,” he went on. “Economic research confirms that cash benefits don’t tend to reduce employment much — if at all.”

Smith cited a 2018 study by the National Bureau of Economic Research that concluded: “an unconditional cash transfer can improve health and educational outcomes.”

The academic study by Ioana Marinescu referenced by Smith also noted that it can decrease criminality and drug and alcohol use, especially among the most disadvantaged youths.”

He also said Republicans were attracted to tax cuts for many of the same reasons – “they were simple, they put money in people’s pockets and let them decide what to spend it on” – but stimulus checks were more balanced.

The less conditional cash benefits are on income, the less they discourage people from working.

The news comes as Americans may face jail time if they don’t spend their stimulus payment on rent.

Meanwhile, monthly checks worth up to $1,400 are being sent out to people nationwide but the president remains under constant pressure from Democratic lawmakers to introduce recurring payments.

It appears that the White House has not completely ruled out introducing another payment in the coming months.

Press secretary Jen Psaki said last week: “He’s happy to hear from a range of ideas on what would be most effective and what’s most important to the economy moving forward.”


Two schoolgirls, 13 and 14, found safe after vanishing 24 hours ago

She added that Biden has already proposed plans he believes will be “most effective for the short term.”

It includes his recent proposals for infrastructure investment and the Americans Families Plan.

Over 20 Democrats signed a letter calling for stimulus checks to be added to American bank accounts automatically, Yahoo Money reports.

What was Ben Roberts cause of death?