RUSSIA is building its first stealth warship, which will be able to search for and wipe out submarines, sending a chilling message to the West.

The hull of the Mercury naval corvette dubbed project 20386 has already been built and the vessel is expected to be delivered to the navy next year. 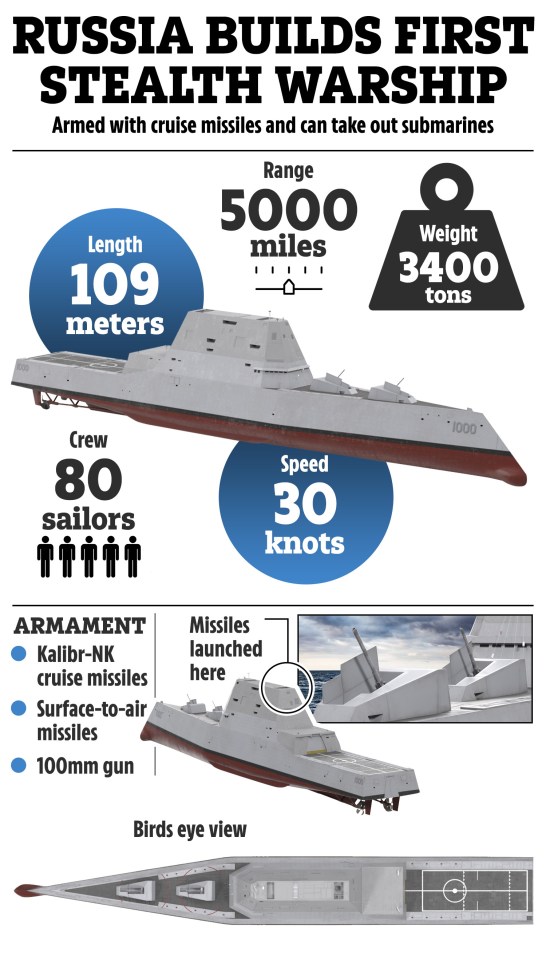 The warship will be equipped with cruise missiles, anti-aircraft missiles and artillery, as well as being capable of searching for and destroying submarines, RIA state news agency said.

Russia has invested heavily in its navy in recent years, part of a push by President Vladimir Putin to revamp the military that has been complicated by Western sanctions.

Political ties with the West are at their worst since the 1991 breakup of the Soviet Union.

Russia had previously used stealth technology such as a radar-absorbing coating into some of its navy vessels, but Mercury is expected to be the first fully stealth vessel with a special shape to minimise protrusions and crevices on its surface, RIA said.

It is also expected to use composite materials and special paint.

Before the annexation of Crimea, in 2014, it was reported that the country would scrap the idea of a fully-stealth vessel.

In 2013 the Izvestia daily newspaper quoted a military source as saying that the vessel would be too expensive, at up to 18 billion rubles (£175 million), and that it would be equipped with “excessive” weaponry such as the Kalibr cruise missiles.

In April, military publication The Military Review criticised the project in an article, saying it was “doomed to fail.”

It also reported lack of equipment to support the weaponry.

Kremlin has been trying to boost its military amid spiralling tensions with the West following Russia’s 2014 annexation of Ukraine’s Crimean Peninsula.

In April it was revealed that Britain could be crippled by Putin’s fleet of submarines focused on tampering with vital undersea internet cables.

The vessels are operated by a branch of the Russian military that answers directly to Putin – with a mission to deliver a catastrophic blow to the West.

The subs are carried underneath beneath an enormous “mothership” undersea vessel and are built to lurk at the bottom of the ocean – entering the Atlantic by sailing down from the Arctic.

They then use robotic arms to tamper with or even cut key cables that help keep the world’s economy moving with potentially devastating consequences.


Desperate search for two schoolgirls, 13 and 14, who vanished 24 hours ago


Teen, 19, dies after being blasted in the head as cops launch murder probe


Mum dangles daughter, 3, over 6th floor balcony 'but then DROPS her to death'

The following month Putin set up a remote subzero Nagurskoye military airbase in a show of strength.

The airbase is heaving with missiles and radar while its extended runway is ready to fly nuclear-capable strategic bombers.

Mohamed Salah, Jack Grealish and Joao Cancelo are only players with six 7+ match ratings this season