WHEN Greg Reardon returned from a weekend away to find the flat he shared with girlfriend Joanna Yeates empty, panic washed over him.

Not only was his girlfriend missing, but the place was untidy, and chillingly 25-year-old Joanna’s bag was strewn across the dining table with her keys and wallet still inside.

He reported her missing but tragically, Joanna’s body was found in the snow by a dog walker eight days later on Christmas morning 2010, sparking a huge murder investigation.

In the days that followed, the public and police were baffled about what happened, with only a series of mysterious clues, including a missing pizza and a discarded earring, to go on.

Now, as a new two part documentary Body In The Snow: The Murder of Joanna Yeates airs from 9pm tonight, we examine how cops cracked the complex case to finally capture the culprit, neighbour Vincent Tabak.

Landscape architect Joanna went missing on the 17 December, after heading home from drinks with colleagues the Ram pub at 8pm. She told them she planned to spend the weekend baking.

After calling a friend, she arrived at her home, which was decorated for the festive season, approximately 40 minutes later, with passers-by later reporting hearing screams, followed by silence, at about 8:50pm.

OUT WITH A BANG

However Joanna’s disappearance was only revealed on Sunday, when her boyfriend Greg Reardon, then 27, returned home after visiting relatives to discover the flat empty and the cat hadn’t been fed.

“I panicked really. It was midnight. It was a realisation that now something is wrong.”

Police began to piece together Joanna’s movements, with CCTV revealing she’d popped to the local off licence to buy two bottles of cider, and a tomato, mozzarella and basil pizza from Tesco.

The pizza became central to the investigation when police noticed there was no trace of it – or the box – in the flat, apart from the receipt.

Detective Chief Inspector Gareth Bevan said at the time: “From CCTV, we know she bought a pizza at Tesco Express in Clifton Village and there is no evidence of the pizza, the wrappings or the box in the flat.”

A few days later, Joanna’s parents David and Teresa made a public appeal for information at a police press conference, saying: “Jo, whatever the reason that you have not been in touch… we want you to know that we love you dearly and are desperate to know that you are safe and well.”

Heartbroken boyfriend Greg also appealed for information, saying: “She was my future. This Christmas was going to be our first together. I was going to spend it with her family, which is always a big deal for a boyfriend.”

Sadly, their pleas were in vain, and Joanna was already dead.

She had been strangled to death, her body was found in the snow by a dog walker on Christmas day, while her engineer neighbour Vincent Tabak – who was later found guilty of her murder – was opening gifts with his girlfriend.

Joanna’s landlord Chris Jeffries was arrested shortly after over the murder, but later released and cleared of any wrongdoing.

Five weeks later, in January 2011, Dutch next door neighbour Tabak was arrested on suspicion of murder after DNA evidence linked him to her body.

That October, Tabak pleaded guilty to manslaughter but was found guilty of strangling Joanna, who was originally from Hampshire, in her flat.

It was also revealed that after bundling Joanna’s body into his car, he’d gone to the supermarket to buy beer and crisps before dumping her body on the side of the road three miles from her home.

It was revealed he killed her in a violent struggle, causing 43 injuries including haemorrhaging and a fracture to her nose, within minutes after she arrived home.

Tabak, who was 6ft 4in, was sentenced to life in prison for the brutal attack, and it was revealed he’d also possessed violent pornography featuring women and children.

‘We will never get over our loss’

For Joanna’s heartbroken family, the impact was devastating, and in a moving interview one year on, Greg revealed he believed they would have gone on to marry.

In a statement, they said: “We will never get over our loss, how she was murdered and the total lack of respect with which her body was treated. We so miss her happy voice and seeing her living life to the full.”

It took nearly a year for Joanna’s mother, Teresa, to be able to set foot in the flat she died in to sort through her daughter’s possessions.

She said: “Going into your daughter’s flat, which was once so full of love and laughter but knowing it was the place where she lost her life so violently, was a tough ordeal.”

Body In The Snow: The Murder of Joanna Yeates starts at 9pm tonight. 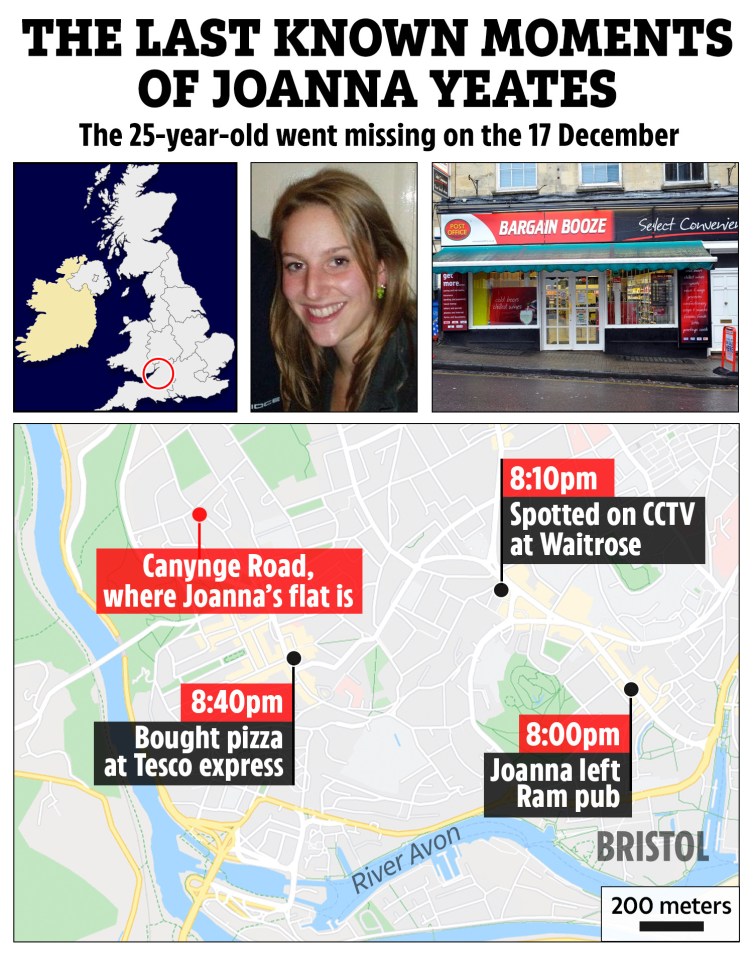 Joanna’s last known moments, including picking up a pizza and cider, were captured on CCTV[/caption]

Joanna and her boyfriend Greg, pictured together, had recently moved to Bristol[/caption]

Girl, 11, survived massacre by PLAYING DEAD after being ‘shot by ex-Marine who killed her dad and a baby in mom’s arms’