The former Prime Minister’s criticism comes after Portugal was dropped off the UK’s Green List causing chaos for holidaymakers. 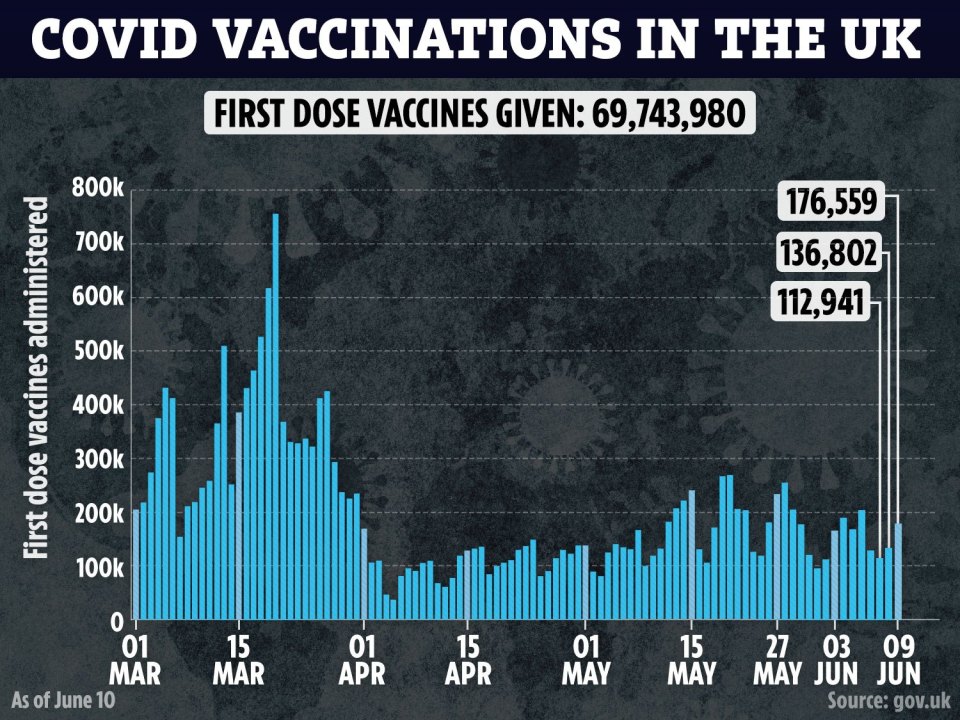 Now just 11 countries remain on the green list, although the majority of them require a mandatory quarantine on arrival or have their borders closed to Brits.

This is despite the fact that a total of 69,743,980 people in the UK have received their first dose of the Covid-19 vaccine.

And earlier this week a record one million jabs were booked by young people keen to get life back to normal.

Now May has warned that Britain is “shut for business” and is “falling behind” in the EU.

She even went so far as to question whether the Government wants a UK aviation sector in the future “because at the rate it’s going, it won’t have one”.

The UK’s vaccine rollout has been hugely successful[/caption]

May says the UK is going backwards, not forwards[/caption]

During a Parliamentary debate on the aviation sector she said:  “One year on we are no further forward, indeed what we have is a devastated industry, jobs lost and global Britain shut for business.

“More than not being any further forward, we’ve gone backwards.

“We now have over 50 per cent of the adult population vaccinated – a wonderful programme – yet we’re more restricted on travel than we were last year.

“In 2020, I went to Switzerland in August, South Korea in September, there was no vaccine and travel was possible – this year there is a vaccine, travel is not possible.

“I really don’t understand the stance the Government is taking.”

Portugal has been taken off the Green list[/caption]

She added: “It is incomprehensible that one of the most heavily vaccinated countries in the world is one that is most reluctant to give its citizens the freedoms those vaccinations should support.”

Brits have already faced travel chaos after Portugal, one of the few countries on the UK’s green list, was removed at short notice.

Frantic holidaymakers were forced to cut their trips short to rush back to the UK to avoid the quarantine restrictions, prompting flights to hit prices of £800.

The UK government have already warned Brits to avoid a foreign holiday this summer and that trips to amber list countries is not advised.

Environment Secretary George Eustice said Brits should stay at home this summer as the spread of the Indian variant has wrecked plans to reopen travel.

May also blasted the government, saying they need to be “upfront with the British people” in regards to the decision about lockdown lifting on June 21.

She said: “We will not eradicate Covid-19 from the UK. There will not be a time when we can say that there will never be another case of Covid-19 in this country …  sadly people will die from Covid here in the UK in the future, as 10,000 to 20,000 people do every year from flu.”

May’s comments came as Boris Johnson and President Biden met a day early before the G7 meeting of world leaders in Cornwall.

During their meeting the US president agreed to launch a taskforce to explore ways of opening a trans-Atlantic air corridor.