DONALD Trump dismissed the threat of climate change on Thursday before urging President Biden to fire his joint chiefs of staff if they view it as a leading issue for the nation.

Trump’s remarks came amid a blast of statements issued through his Save America PAC as Biden met with British Prime Minister Boris Johnson in England – his first trip abroad as president. 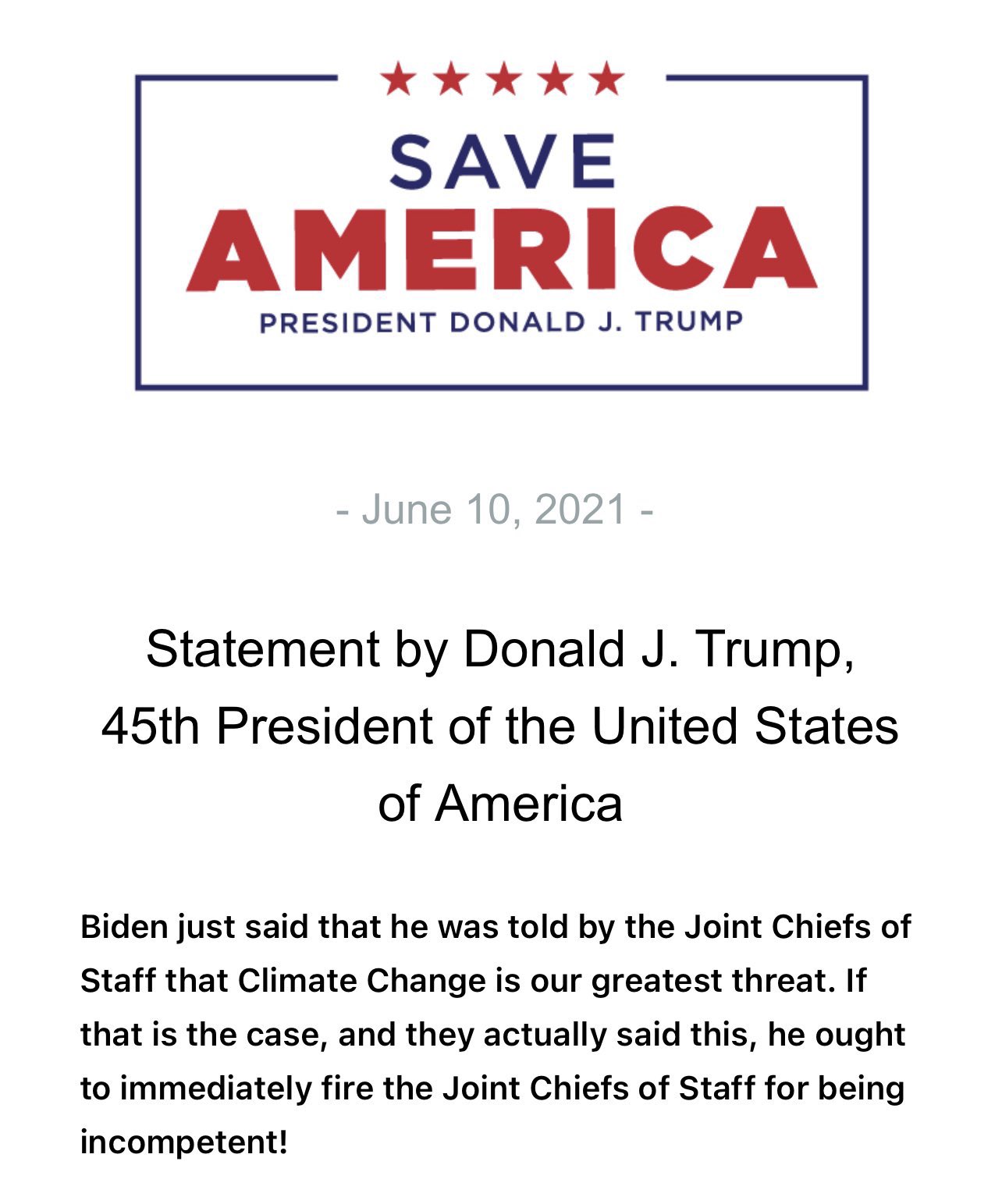 Biden and Johnson sat down for talks in Cornwall on Thursday ahead of the G7 summit, in which climate change is set to be high on the agenda.

“Biden just said that he was told by the Joint Chiefs of Staff that Climate Change is our greatest threat,” Trump wrote in a statement, taking Biden’s remarks out of context.

“If that is the case, and they actually said this, he ought to immediately fire the Joint Chiefs of Staff for being incompetent!”

Trump’s remarks came in response to a speech Biden gave to US troops as he arrived in England on Wednesday.

“When I went over in the Tank in the Pentagon, when I first was elected vice president, with President Obama, the military sat us down to let us know what the greatest threats facing America were,” Biden said.

“And this is not a joke: You know what the Joint Chiefs told us the greatest threat facing America was? Global warming. Because there’ll be significant population movements, fights over land, millions of people leaving places because they’re literally sinking below the sea in Indonesia, because of the fights over what is arable land anymore,” he added.

The current Joint Chiefs (shown above) were appointed by Trump[/caption]

The officials who gave Biden the advice back in 2008 are no longer in office.

The current Joint Chiefs were appointed by Trump.

“Climate change is a threat. Climate change has significant impact on military operations, and we have to take it into consideration,” Milley said.

In various other statements issued on Thursday, Trump celebrated his “exonerations” from a series of “illegal witch hunts”, including Robert Mueller’s Russia probe against him and his administration.

“Now that I have been totally exonerated on the Mueller Witch Hunt with a charge of No Collusion, I have often wondered, if a fake investigation is illegally started based on information provided and paid for by the DNC and the Clinton campaign, shouldn’t they be held accountable?” Trump asked.

“Not to mention, wasting tens of millions of taxpayer dollars and interfering with years of a presidential administration? I fought the made-up Hoax strongly and effectively, and I won.”

Trump also called the allegations against him “fabricated.”

“They fabricated, out of thin air, the fake allegation that I obstructed justice, and I won that too. Think of it, how can you obstruct justice when you were fighting a false and illegally submitted narrative?”

Trump also sought to take a victory lap for other so-called “illegal witch hunts” against him.

In various other statements issued on Thursday, Trump celebrated his ‘exonerations’ from a series of ‘illegal witch hunts’[/caption]

Earlier this week, an Interior Department inspector general’s report found that US Park Police did not clear protesters from a park outside of the White House last year so then-President Trump could take a photo at a nearby church.

Amid national racial injustice protests ignited by the police killing of George Floyd last year, on June 1, 2020, Trump walked from the White House to St. John’s Church which had been damaged amid protests.

As he did, law enforcement violently cleared what had been mostly peaceful protesters in Lafayette Park.

Trump then stood in front of the church and held up a bible.

“This week I have been totally exonerated by the Inspector General in the clearing of Lafayette Park, despite earlier reports that it was done for political purposes,” Trump wrote in his statement.

“And I have also been totally exonerated in Congress by the testimony of former White House lawyer Don McGahn. It came, it went, and it was a big ‘nothingburger’.”

He added: “But fear not, the Radical Left, country destroying, illegal Witch Hunts continue, and I will win those too!”

He blasted the Mueller report as a ‘witch hunt’[/caption]

In a third statement, Trump celebrated G7 leaders calling for an investigation into the origins of Covid-19 and demanded that China pay $10 million in reperations.

“It is now unanimous, and I have been proven right (once again) that the initial World Health Organization Report on the Wuhan Lab was flawed and must be redone, this time by a truly transparent investigation,” he said.

“We were right about the China Virus from the beginning, and now the entire world sees it.”

Trump has long supported the notion that Covid-19 was leaked from a lab in Wuhan, despite rebuttals from public health officials.

Most read in Uncategorized

'YOU THINK I WON’T KILL HER’


Teen couple joked about ‘murdering somebody’ in video after 'stabbing dad'

“This is why the Chinese Communist Party should pay $10 Trillion in global reparations for what they allowed to happen, the worst event in world history,” Trump added.

“Even here in the United States, the so-called experts like Dr. Fauci were wrong about the Wuhan Lab and China’s role the entire time. Just think how bad things would have gotten if I followed Dr. Fauci’s advice and never closed down travel from China (and other things)?

“Dr. Fauci likes to say that he is ‘science,’ when in fact he is merely science fiction!” Trump quipped.

Prince Edward young pictures: What was the Queen’s son like as a child?

Just as we cheer on our nation in the Euros, let’s all back Global Britain

Brian Laundrie’s parents may be forced to pay $1.2M spent on search for their son ‘if they lied about disappearance’

Who is Kelly Price’s fiancé?