Osi Umenyiora knows a thing or two about beating Tom Brady in a Super Bowl. And his advice to the Kansas City Chiefs is to take his head off.

Umenyiora was a key part of a fearsome New York Giants defensive line which ended the New England Patriots’ hopes of a perfect 19-0 season 13 years ago. 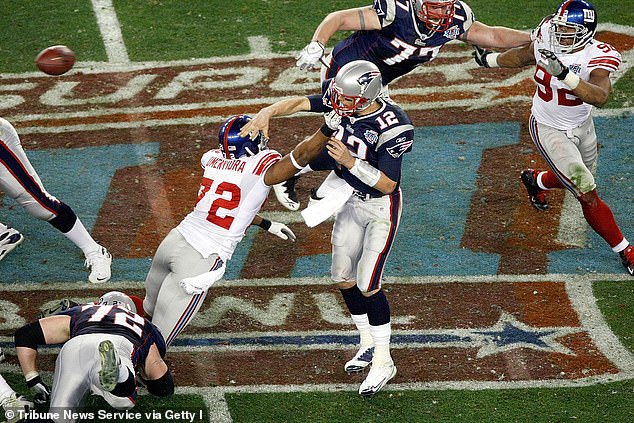 Featuring Randy Moss and Wes Welker, the Patriots offense had rewritten rule books and the record books that season. But the Giants were focused on one thing.

‘Our only thinking was we have to take his head off, period,’ Umenyiora said.  ‘Whatever scoring they wanted to do, that’s on them. Our issue was we have to get to this quarterback and we have to eliminate this guy as quickly as possible. I think in the course of doing that, that was what enabled us to keep the scoring down.’

In Brady’s first MVP season the Patriots had redefined offense, scoring a then unprecedented 589 points. Brady threw 50 touchdowns as Moss reeled in 23 touchdown catches – more than anyone in NFL history. 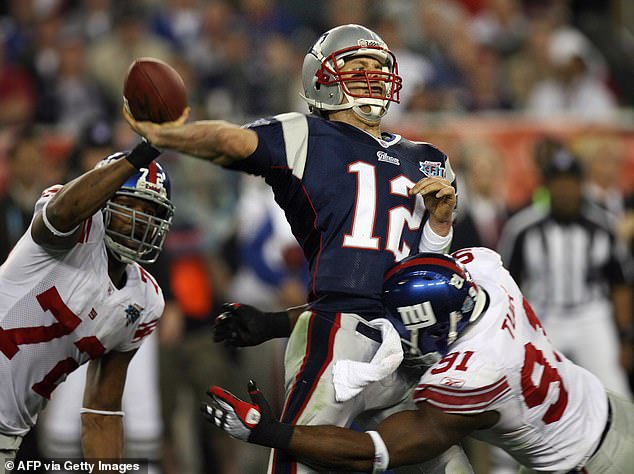 And in the build-up to the game, Brady did himself no favours by laughing off Giants receiver Plaxico Burress’ pre-game prediction of a 23-17 Giants win.

‘Yeah, that wasn’t good at all. That really sealed his fate,’ Umenyiora said. ‘I think if there was any doubt about what was going to happen when he did the little laugh, there really wasn’t after him saying that. It was the disrespect.

‘After he said it we were looking at him like, “Who does this guy really think he is?” Maybe now would be different, we would be like, “Well, yeah, he’s Tom Brady”, but at that point in time, we didn’t think that he should have reacted in that manner, took us for a joke, considering all the things that we had done to get to that particular point.’

The Giants won 17-14 thanks inspired play from quarterback Eli Manning and the outrageous ‘helmet catch’ from David Tyree. And of course, that fabled defense. 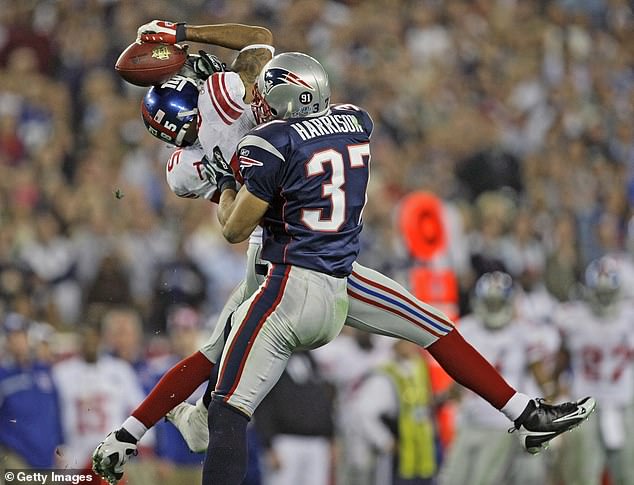 ‘The first time we played New England, they had those kind of weapons,’ Umenyoira said. ‘They probably had better receivers. They had Randy Moss, who’s the all-time great playing at an extremely high level. They had Donte Stallworth. They had a young Wes Welker.

‘So they were very dynamic at the wide receiver position. And it never really changed for us. It was all about getting pressure to the quarterback, getting our hands on him before he can release that ball.’

Four years later, the Giants went 9-7 in the regular season and kept on winning on the road in the playoffs. The Patriots and Brady were waiting for them in Indianapolis.

‘Now, the second time we played them, it was a completely different approach because they didn’t have those kind of weapons,’ Umenyiora said. 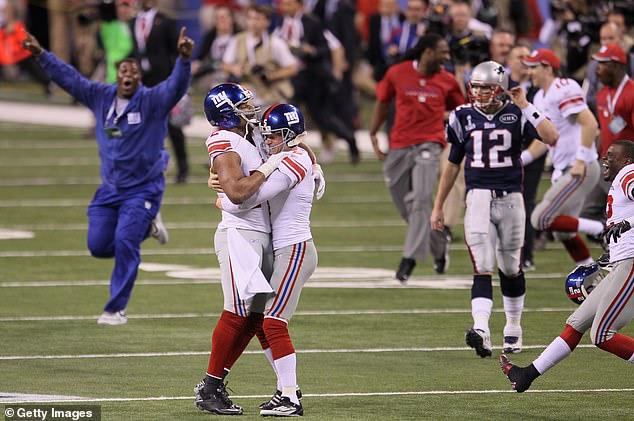 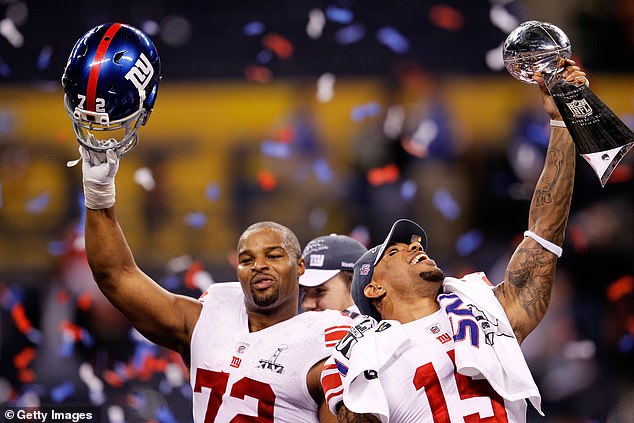 ‘They had Rob Gronkowski, though, and they had Aaron Hernandez and it was more tight end driven and run game driven. So we had to eliminate the run game and eliminate the short intermediate routes and we’re able to do just that. So it’s two completely different approaches.’

While Hall of Famer Strahan had retired, Tuck was still alongside Umenyiora. As was feelow bookend Jason Pierre-Paul.

Now with the Buccaneers, Umenyiora speaks to his former team-mate every week and took the opportunity to speak to him during Monday’s media day.

‘I didn’t even have a question, I just wanted to say what’s up,’ Umenyiora said, to much glee from Pierre-Paul.

He also spoke to Spagnuolo – who will again try to stymie Brady in the NFL showpiece.

‘Steve is the best he’s the best coordinators I’ve ever seen at making adjustments. One time the offense came out and they were running something we’d never seen, so he brought up the whiteboard.

‘He brought out the marker. He drew up a defense. He’s like, OK, this is what we’re going to run now. And as a defense, we’d never seen, never ran, never even heard of that offense,’ Umenyiora said.

‘So in regards to adjustments, he’s going to be able to adjust to whatever Tampa Bay has to offer. It’s just going to be up to the players to see if they can execute.’

Umenyiora didn’t leave it there. In response to Sportsmail’s question, he last week revealed that he had never spoken to Brady. 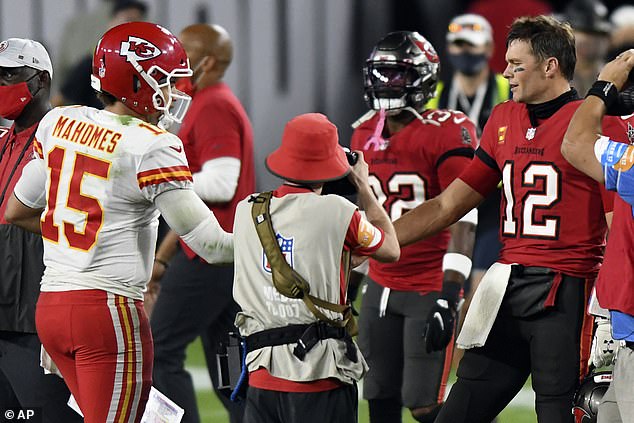 But that all changed on Monday. The pair shared an enjoyable online exchange – and Brady didn’t dodge his questions.

‘My guy. I’m happy I’m not playing you this week,’ Brady laughed. ‘That 2007 game is one of my least favorite football memories, just so you know.’

And after threatening to knock his head off all those years ago, Umenyiora got something off his chest too.

‘I got to be completely honest with you, Tom, I was one of the people who said, “Some of this guy’s success has been due to being in New England and being with coach Bill Belichick”.

‘You’re coming clean, is that what’s going on?’ Brady replied.

‘Exactly what’s going on, I’m coming clean,’ said Umenyiora before signing off: ‘I appreciate you, Tom. I’m really rooting for you guys. Go do it.’

'He makes me feel RUBBISH!': Not even Ben Stokes thinks he compares to Joe Root