THE UK Covid-19 cases keep soaring for the second day in a row as more than 7,000 cases are recorded while the Indian variant takes hold.

Official statistics released this afternoon show seven people have died and 7,393 have tested positive across Britain in the past 24 hours. 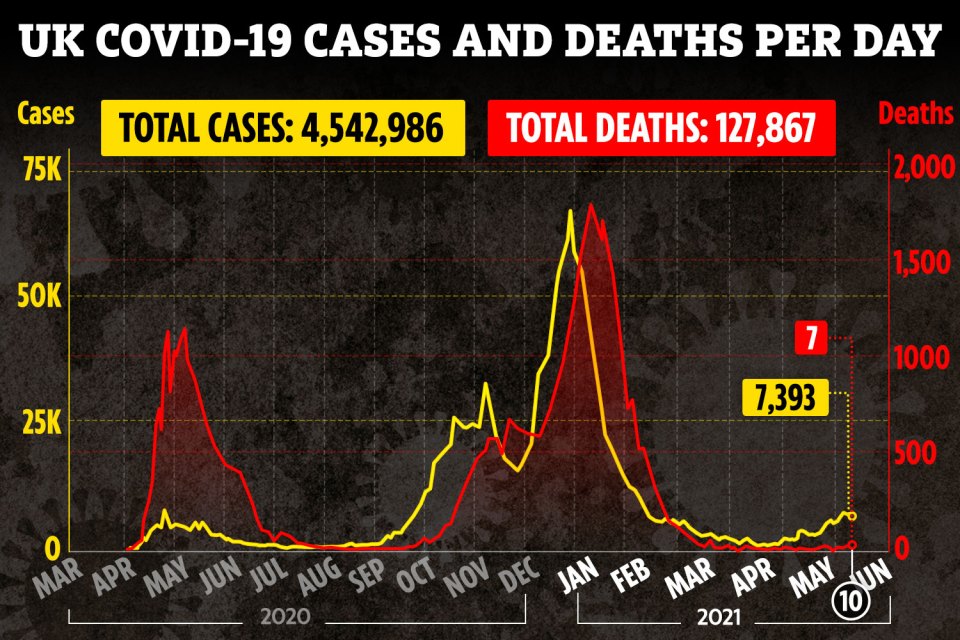 Cases are rising for the second day in a row[/caption]

It comes as yesterday the highest number of cases was recorded with 7,540 people testing positive and six deaths.

There has been a significant rise in the number of cases since last week when 5,274 cases were recorded.

However, the number of deaths remains low as last Thursday, 18 deaths were reported.

It comes as new data has revealed that the Indian variant has now spread to all parts of the country and is now dominant in the UK, making up 91 per cent of cases, according to Health Secretary Matt Hancock.

In just two weeks, the strain went from a proportion of 38 per cent to 75 per cent, making it dominant in England.

Earlier this week Matt Hancock warned the Indian Covid strain is 40 per cent more transmissible than other Covid variants.

The Health Secretary added that the spread of the variant had made the decisions behind the June 21 unlocking “more difficult” as he confirmed the latest advice is that the Delta mutation is more infectious than other strains.

Meanwhile, nine places in the UK have seen cases rising likely driven by the Delta variant.

Stirling, Manchester, Rochdale, Bolton, Kirklees, Lancashire, St Helens, Renfrewshire and East Dunbartonshire are those that saw Covid prevalence rise in the past week.