BRITS are to enjoy a 28C scorcher before being hit with three rounds of rain and thunderstorms – ending the country’s heatwave.

Southerners are set to bask in the balmy temperatures today before the stormy weather hits this evening.

Beach goers took in the views at Durdle Door[/caption] 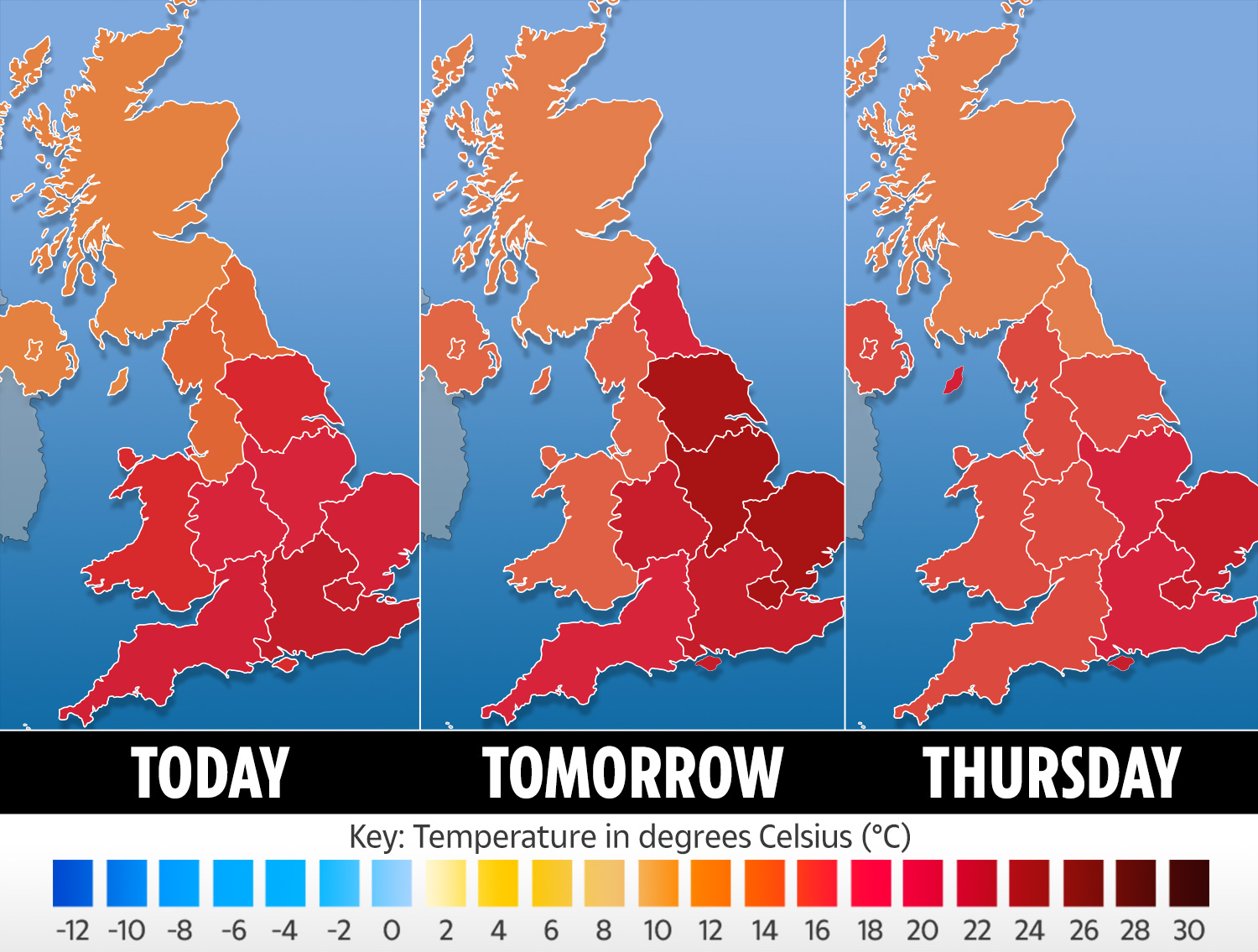 Monday marked the hottest day of the year so far, with temperatures soaring to 29.7C in Teddington, Middlesex, and Met Office meteorologists have said Wednesday could be even warmer in the south.

Met Office forecaster Steven Keates said there will be a “big temperature contrast” in areas north of Yorkshire compared with much of the county and areas further south today.

Temperatures of up to 28C are predicted in London, 20C in Cardiff and 16C in Edinburgh, due to a warm front covering the southern half of the nation.

However, Mr Keates added the sweltering start to the week will be followed by “three potential rounds of thunderstorms” moving from Europe on Wednesday night, and again on Friday and Sunday.

The Met Office issued a  yellow weather warning for torrential downpours with  hail and lightning.

The alert lasts until midnight,  with the south coast from Dorset to Kent at most risk.

Dean Hall, senior meteorologist at the Met Office, said: “The thunderstorms are developing over France and will gradually drift northwards to the south coast.

“By 9pm tonight it will be pretty lively with torrential downpours, lightning and even the chance of hail across the South. We could easily see over an inch of rain in an hour in any one location and as much as two inches over two to three hours.”

After a brief pause more thunderstorms, will arrive on Friday and remain a threat for 24 hours.

But concentrating quite literally on the calm before the storm, Mr Keates said: “It looks like the full force of the heat is going to come back on Wednesday for southern and central England, Northern Ireland and Wales.

“There’s a chance that Wednesday could become the hottest day of the year.

“But there’s a big temperature contrast across the North West versus the South East.”

The Weather Outlook reported earlier this week: “The first half of the coming week is looking very warm or hot in southern and central areas.

“But by Wednesday the risk of thunderstorms increases.

“The heat builds in the southern half of the country on Wednesday and temperatures could reach 32C (90F) locally.”

The website adds: “As the day progresses there will be an increasing risk of thunderstorms in the south.

“The northern has more cloud and lower temperatures. In the north west there could be patchy spells of rain.

“During the rest of the week changeable and cooler conditions spread southeastwards across all areas.”